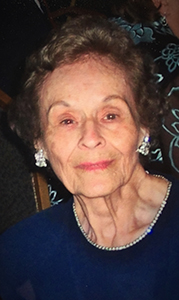 Margaret Lee Eley Ramsey, 95, went home to be with the Lord on Aug. 30, 2017. A longtime resident of Suffolk, she is predeceased by her husband, John Carter Ramsey Jr., and brothers, Presley Luther Eley, Jr., Lawrence Allen Eley and Carey M. Eley.

Left to cherish her memory are her daughter, Barbara Ramsey Morris, and husband, Larry, of Suffolk, and her son, John Carter Ramsey III and wife, Beth, of St. Simons Island, Ga. She is also survived by her brother, Kenneth Cotton Eley, of Suffolk, and her sister, Angie Eley Griffin, of Windsor. In addition, she will be greatly missed by her grandchildren, Suzanne Morris Pruitt and husband, Todd, of Suffolk, Leigh Anne Parks and husband, Doug, of Suffolk, Dinah Morris Oliver and husband, John, of Windsor, John Carter Ramsey IV and wife, Amber, of Grand Cayman Island, Ashley Ramsey Lauter and husband, Brett, of Atlanta, Ga., and William Troy Anderson, of St. Simons Island, Ga. Her legacy continues through her great-grandchildren, Dylan Reed Pruitt, Riley Allen Pruitt, Jackson Carter Parks, Georgia Grace Oliver, Aria Demich Ramsey and Aven Carter Ramsey. She will be greatly missed by many nieces and nephews, extended family members, neighbors and friends.

Margaret was born on May 14, 1922, to parents Presley Luther Eley and Margaret Olivia Cotton Eley. She was raised in Franklin until age 12 and was an active member of Sycamore Baptist Church. Her family then moved to the Everets Bridge area of Chuckatuck, where she attended Chuckatuck High School and Oakland Christian Church. Margaret’s father died at age 46, leaving her mother with six children, including a 1-year old sister. Margaret learned to raise a child, to cook, to sew and to clean house at an early age. Some of her duties included going to the farmyard to catch chickens and prepare them for cooking. Her farm tasks also included hand-picking cotton from the fields at harvest time. She walked a mile to and from the school bus stop every day. She “loved school and loved everyone.” She was voted May Queen her senior year at Chuckatuck, with her peers paying a penny for each vote. After graduation, Margaret rented a room at a boarding house in Suffolk and worked at People’s Drug Store. She met her future husband, John, when he would come to the store in his National Guard uniform and request that only “Miss Eley” make his milkshake. Margaret and John married in 1943 and moved to his parents’ home, where she became the caregiver of his sickly mother. Within a few years, John built a new house for his wife, and together they established this home and raised a family of their own. As years went by, the homeplace became affectionately known as “The Do Drop-In” to family and friends. Margaret worked part-time in the office of Ramsey Lumber Company. She was a very active member of Suffolk Christian Church and a past president of the West Memorial Bible Class. She was always on a church committee, serving in most any capacity. Additionally, she was an active member of the Lake Kilby Garden Club. She enjoyed the flowers (particularly her azaleas) around her home and took great care with floral arrangements, food and preparations for the many luncheons, receptions and celebrations she hosted throughout the years. She loved having family and friends in her home. Her warm hospitality, gentle smile and gracious spirit will be fondly remembered by all.

Margaret was a caregiver to her late husband, insisting on his comfort and care at home until his death, just nine days prior to their 64th wedding anniversary. She continued to live independently until a stroke affected her eyesight. After being at home for 66 years, she moved to East Pavilion in Franklin. Margaret always had a thankful heart and could be heard frequently counting her blessings. The family wishes to express many thanks to Virginia Bowers, Jackie Skeeter, Mary Davis and Susan Judkins for their loving devotion and care of her at home. The family also wishes to thank Dr. James Holleran (Bayview Internal Medicine, Suffolk), Dr. William DeLacey (Sentara Cardiology, Suffolk), Dr. Leonard Rappaport (Tidewater Eye Centers), Dr. Afreeda Hashmi (Southampton Memorial Hospital), Joyce Lynch (RN of Hospice of Virginia), and each one of the nursing staff on South Wing at East Pavilion for their professional and compassionate care.

The family will receive visitors and friends at R.W. Baker & Co. Funeral Home and Crematory, 509 W. Washington St., Suffolk, from 6 to 8 p.m. on Thursday, Aug. 31, 2017. A funeral will be conducted at R.W. Baker & Co. Funeral Home and Crematory on Friday, Sept. 1, 2017, at 2 p.m. officiated by the Rev. Michael D. Halley and her nephew, the Rev. Kevin Eley. A reception will follow the service in the Fellowship Hall. Burial will be private with the family at Cedar Hill Cemetery. The family requests that in lieu of flowers, memorial contributions may be made to the West Memorial Bible Class of Suffolk Christian Church, 216 N. Main St., Suffolk, VA 23434 or to the Nansemond-Suffolk Rescue Squad, 428 Market St., Suffolk, VA 23434. Condolences may be registered at www.rwbakerfh.com.