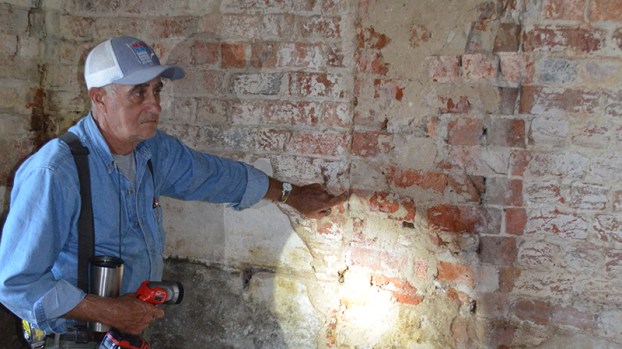 Windsor Castle Park site superintendent Roger Ealy points at the discontinuous brick patterns that indicated a wall that was up in the basement of the manor house centuries ago.

A mystery discovered in the walls of a historical Smithfield building has been solved with architectural detective work.

Puzzling details were discovered early on in the restoration of the Windsor Castle manor house. Plaster was being removed from basement walls when site superintendent Roger Ealy noticed something odd in the brick patterns.

Scars of removed bricks indicated intersections of walls long removed. Further inspection revealed English brick bonding that was common in the colonial era, but in stark contrast to the manor’s decorative details characteristic of the Greek Revival period in the 1840s.

“We realized we were in a much older house than it appeared on the outside,” Ealy said.

Dr. Carl Lounsbury, a College of William & Mary adjunct associate professor and architectural historian, investigated the development history of the manor house. His August report concluded that the house was developed over three phases dating back to around Smithfield’s founding in the early 1700s.

Lounsbury has studied hundreds of colonial homes during the past 40 years. In his experience, bricks tell the story.

“It’s recognizing patterns of construction technology or decorative detailing, and understanding which periods those were used,” he said.

According to the report, the original manor was built in the first half of the 18th century. This was described as having features common to “ambitious dwellings,” such as Bacon’s Castle in Surry County and the Matthew Jones House in Newport News.

Brickwork suggests that a one-room addition was finished sometime after 1755, and that another expansion took place in the 1840s by then-owner Watson P. Jordan. These created the rectangular shape of the manor that stands to this day.

Doorways and windows were also modified, and the exterior of the house was covered in fine plaster to conceal inconsistent masonry.

“Although obscured by major alterations made in the 1840s, the core of the colonial house erected by the Smith family survives intact and is evident in the cellar in the scars and bonding patterns of the brickwork,” Lounsbury stated in the report.

He concluded that the original layout of the house correlated with a room-by-room inventory that was conducted after Smith’s death in 1755.

“That inventory told us they had not yet put an addition to the building,” he said. “It tells exactly how the rooms were used, and because we know that we can look for certain decorative details.”

The manor house restoration is part of a $5 million project to renovate the 208-acre riverside park for festivals, weddings and other occasions. An interpretive display will be installed in the manor house to explain its architecture across centuries.

“It’s just nice to be able to document what you have,” Ealy said.

“It’s nice to be able to put the building into a pattern and understand how it fits into the architectural development in 18th-century Virginia,” he said.

A Pruden Boulevard church has started a new preschool that is serving children ages 2 ½ to 5, plus elementary-age... read more