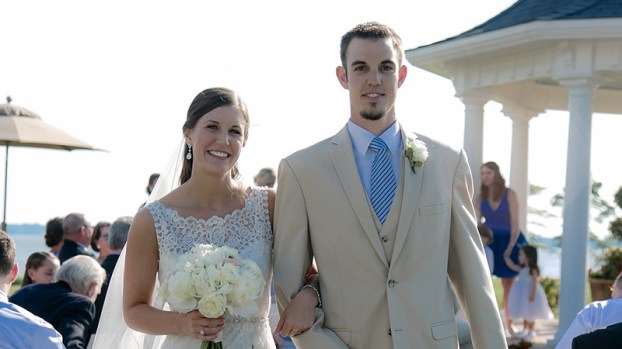 Brett Nichole Gwaltney and Daniel Corbin Bowie were married on Saturday, June 10, 2017, at 5:30 p.m. on the lawn at Two Rivers Country Club at Governors Land in Williamsburg. The Rev. Samuel Askew, of Windsor, officiated the ceremony, and Cheryl Pearson, of Chesapeake, was the violinist. A cocktail hour was followed by dinner and dancing in the River Room. A spectacular sunset on the James River completed the celebration.

The bride, the daughter of Mr. and Mrs. William A. Gwaltney Jr., of Windsor, was given in marriage by her parents and escorted by her father. She is the granddaughter of Mrs. Dorothy G. Gwaltney and the late William A. Gwaltney, of Windsor, and Mrs. Edith P. Whitfield, of Franklin, and the late John Carson Rose, of Carrsville. Brett is a graduate of Nansemond-Suffolk Academy and Virginia Tech. She is registered dietitian with Virginia Commonwealth University Health System, Richmond.

The groom is the son of Mr. and Mrs. Corbin G. Bowie, of Bowling Green. He is the grandson of Mrs. Mary Bowie and the late Mr. Carlyle Bowie, of Woodford, and the late Mr. and Mrs. Allen Tignor, of Tignor. Daniel is a graduate of Caroline High School and Virginia Tech. He is a technology technician with Carter Machinery in Mechanicsville.

The couple was given a sparkler send-off by family and friends. After a honeymoon in St. Lucia, the newlyweds reside in Hanover.