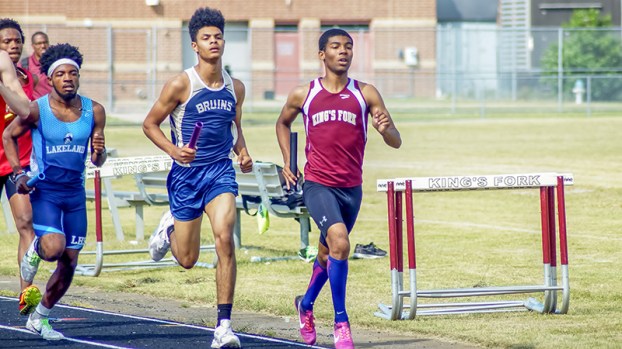 The Bulldogs cross country team is optimistic about this season and has hopes of reaching the state meet.

The Bulldogs are two meets into the season. On Tuesday, they competed in the first Southeastern District meet of the season. The boys’ team took fourth place, and the girls’ team took seventh place.

Coach Steve Sheppard is looking forward to what the Bulldogs have to offer this season. The numbers have grown with both teams, from 35 runners last year to close to 60 runners this year. King’s Fork girls’ basketball coach Maurice Fofana is an assistant coach that also helps push the runners. During the month of August, Sheppard put a workout plan in place for King’s Fork, which he thinks will pay dividends for his team once the postseason comes.

For the boys’ team, they finished a place higher than they did last season and were nine points away from finishing third in the meet Tuesday. Shamond Smith led the way for King’s Fork, placing fourth overall in the meet with a time of 18:29.77. Smith will be among the top five runners for the boys again this season, as he was last year during indoor and outdoor track. Tyler Gray finished sixth overall in the meet with a time of 18:49.10. Gray, like Smith, will also be among the top runners for the boys’ team. Marcus Ramos, who is the No. 3 runner for the boys and team captain, will be expected to do good things for the Bulldogs this season.

The girls’ team improved a spot as well. Madeline Rawlings was the top finisher for the team Tuesday. King’s Fork’s girls’ team is very young this year. Out of their top seven runners, one is a senior. Right now, the Lady Bulldogs are figuring out what type of team they will have for the season and who will step into a leadership role for them. Hannah Marston is the team captain for the girls’ team. She was an all-conference runner last year and will be a big part in helping the girls’ team grow.

Sheppard still coaches his buddy system philosophy for cross country. During practices, Sheppard has six or seven runners always pushing each other. When they see better teams on the course, encouraging one another will be critical.