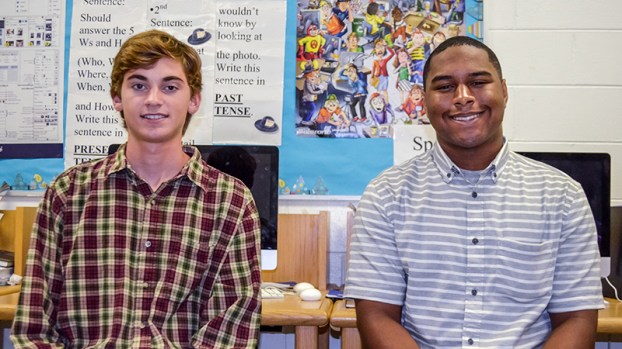 The National Merit Scholarship Association announced the semi-finalists for the 2018 National Merit Scholarship Program on Wednesday. The list of more than 16,000 names features the highest-scoring entrants in each state on the 2016 Preliminary SAT test, from about 1.6 million juniors who took the test last year, representing more than 22,000 schools across the country.

Suffolk semi-finalists Campbell Hogg and Jordan Houston both attend Nansemond-Suffolk Academy. The two have known each other for their entire high school careers, and they share the excitement of this opportunity.

“It feels good, of course,” Houston said. “I’m honored and just kind of proud of myself. It’s good to know that hard work really pays off.”

Houston is head of the NSA literary magazine “Spectrum” and editor for the yearbook when he’s not practicing as a defensive end for the football team. He said being on that team since eighth grade has helped shape him into a driven student in his senior year.

“It’s always fun to be part of a team,” Houston said.

Campbell, meanwhile, has played soccer since the eighth grade and added tennis to his extracurriculars when the boy’s team started again during his sophomore year, he said.

An NSA student since preschool, he’s now chair of the Upper School judicial council and class treasurer. He said he has been most significantly influenced by the responsibilities of the latter, such as fundraisers and prom.

“I’ve been involved with so many of the important events for our class by being treasurer,” he said. “It’s been a really big responsibility for me to take things into my own hands and make high school an enjoyable experience.”

The two NSA seniors will have the opportunity to advance in the program and be considered for approximately 7,500 National Merit Scholarships that will be offered next spring.  They’ll have to submit detailed scholarship applications that include their academic records, extracurricular activities, leadership qualities, employment history and notable honors and awards.

About 90 percent of the semifinalists are expected to advance, but only about half of the finalists will win a National Merit Scholarship and the Merit Scholar title, according to the press release.

Houston said his plan is to simply maintain his academic success and improve where he can. Hogg said he is equally determined, but he also wants to enjoy the process.

“I just want to enjoy my last year of high school while I can and make the most of every day,” Hogg said. “Junior year just flew by so fast, because I was so busy. I want to take in my senior year and enjoy it but still finish strong academically.”