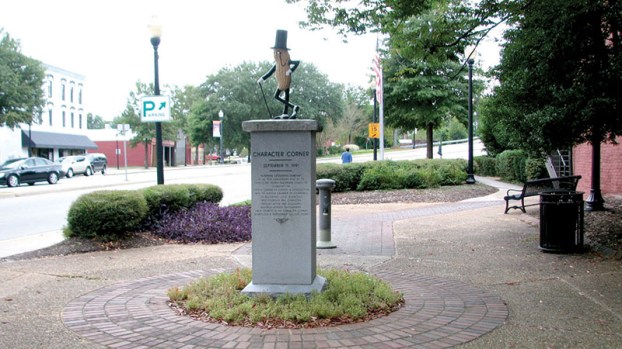 Character Corner in downtown Suffolk may soon be renamed in honor of former Mayor Andy Damiani, who died Aug. 5. The corner features landscaped gardens and a statue of Mr. Peanut erected in 1991.

The legacy of former Suffolk Mayor Andy Damiani lives on in downtown Suffolk, and Suffolk City Council made a move at its Sept. 6 meeting toward memorializing that legacy.

Damiani died Aug. 5 at the age of 95. He was a persistent advocate for revitalization of the downtown area in his adopted hometown.

“I think anyone who knew Mr. Damiani was well aware of his contributions and dedication to our city, the downtown area in particular,” Councilman Mike Duman said during the meeting.

Duman made a motion to have the city manager bring a report on the possibility of renaming an area of downtown to “Damiani Square.”

The area, currently known as “Character Corner,” is on the southwest corner of the intersection of Main and Washington streets, on one end of a block where Damiani owned several buildings and lived for a few of his final years.

The park-like setting features benches and a statue of the Planters Peanuts marketing icon Mr. Peanut, erected in 1991. The statue is surrounded by a landscaped garden.

“I believe it would be appropriate to recognize and honor Mr. Damiani’s lifelong contribution to our city by possibly renaming what is now referred to as Character Corner to Damiani Square,” Duman said during the Sept. 6 meeting. He asked for a staff report on compliance with current policy, suggestions for on-site recognition of the new name and formal action that may be required.

Duman added he believed the location “would be a very appropriate and fitting tribute to Mr. Damiani’s legacy.”

Damiani’s nephew, James Daman, said the family was pleased to hear of the potential recognition.

“On behalf of Andy’s family, we are honored that Suffolk City Council would consider recognizing Andy by naming a square in his memory,” Daman said on Monday. “Andy had an unwavering love for his beloved city, and I know he would be very pleased and humbled to receive this recognition.”

Deadline approaches for Women of Distinction