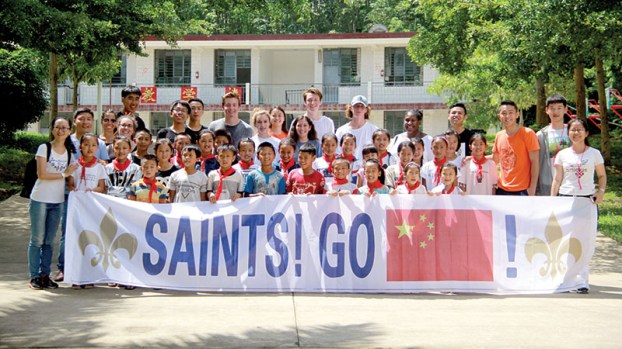 A group of students from Nansemond-Suffolk Academy poses behind one of their banners with students of the elementary school they visited in China’s Xishuangbanna city located in the Yunnan province. (Submitted Photo)

An international student at a Suffolk school spent years preparing a summer trip.

Parent and teacher chaperones and a documentary crew joined them. Zhang said he partnered with a Chinese company to help fund the trip in exchange for advertising on team T-shirts.

The documentary for their weeklong adventure was presented to more than 100 students and faculty at an assembly on Monday.

“I’ve been planning this trip for almost two years, and I utilized all available resources to make it happen,” he said in the documentary. “After I make the documentary, I want to watch this movie 30 years later, and it’s still a classic. It’s not just a trip you can forget about.”

From June 8-13, Zhang showed the group everything this part of the world had to offer.

They made delicious dumplings at his family’s home with his grandmother. They tried numerous exotic dishes of varying flavors and spiciness, including sticks of shrimp and hot peppers.

The documentary footage showed the group’s time with exotic birds, butterflies and performing elephants. They even got the chance to ride the elephants.

“They’re not as soft as they look,” Townsend said with a laugh.

Zhang prepared missions for his group in advance.

Each mission paired one of the NSA students with one of his local Chinese friends. The pairs wore matching-colored shirts and learned to communicate with each other as they worked together.

“We’re going to build a bond,” Zhang said in the documentary. “That’s our purpose for this trip.”

One was a scavenger hunt through a crowded marketplace filled with hand-crafted items and cooking ingredients. They had to use hand gestures and limited Chinese to communicate with sellers.

“I had to get a whole fish for my list, and it was a pretty good-sized fish,” Woods said.

Another led them across an open field beside a mountain tea factory. They collected vegetables to cook with eggs in a wok over a flame. The same woman that conducted the tea ceremony earlier that day judged their dishes.

They got to know children at two different schools. One was for deaf, blind or disabled children. Some of them described how impressed they were by how well these students functioned despite their complications.

“It was really cool to see how well they were doing,” Birdsong said.

At an elementary school, the group taught students English at a surprisingly fast pace, according to Wren.

“We could teach them full English sentences in under a minute, and for us it took like three minutes for just a couple of words,” he said.

Footage showed the group rafting on a river and scaling mountain steps for breathtaking vistas. The camera caught them tossing water on each other in a massive fountain while dressed in local clothing.

“In my hometown, people believe water is good for purifying evilness,” Zhang said.

Some of the juniors explained how much they had learned during the trip. Others emphasized how every moment was a new, exciting experience.

“It’s just crazy how different it is from here,” Birdsong said. “Even just doing the most mundane thing, we saw so much.”

Zhang joked that his biggest goal was just to get everyone back safely. Beyond that, he said, he was successful in sharing his home culture.

“It’s not a bad thing to witness different cultures,” he said. “It’s a benefit for your life.”

Search for “2017 NSA China Trip” on YouTube to view the documentary.

A local credit repair expert has some advice for consumers who were affected by a large security breach announced earlier... read more