NR golf on to regionals

The Warriors golf team is preparing for regionals after wrapping up its regular season Tuesday afternoon. 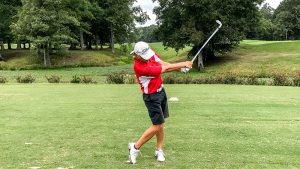 Jackson Lyons finished the season with a low average 79.5 for the Warriors this year. It is the lowest average in more than five years for Nansemond River High School.
Brandon Frye photo

The Nansemond River High School golf team finished its regular season with a 7-5 record but ended the season with a loss to Western Branch High School Tuesday. The Warriors also won the city championship again this year.

“We look to work hard over the next two weeks to prepare for regionals,” coach Brandon Frye said.

The Warriors plan to have a practice round Sept. 26 at Newport News Golf Club at Deer Run. Class 5 regionals start on Oct. 3 at the same course.