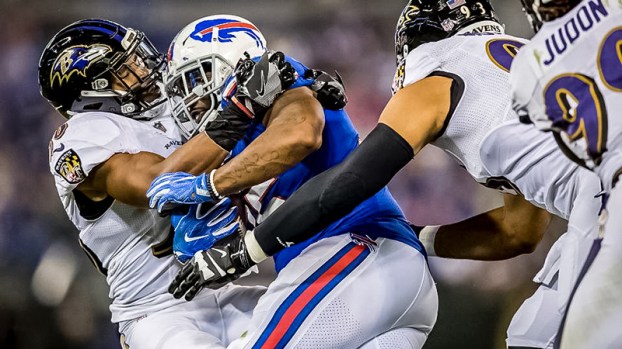 Chuck Clark, pictured getting a tackle in a preseason game against the Buffalo Bills, earned his first tackle in an official NFL game last Sunday against the Cleveland Browns. Baltimore Ravens photo

Clark, who plays for the Baltimore Ravens, logged the milestone in the game against the Cleveland Browns. Clark was drafted by the Ravens in the sixth round of the 2017 draft in May and has impressed ever since.

A lot of Clark’s production this season will come from special teams. However, Clark did earn playing time at the safety position in the first game of the season, when a starter went to the sidelines for a play.

“He’s a very instinctive player,” Ravens Director of College Scouting Joe Hortiz said about Clark. “He’s aggressive as a blitzer; he’s physical; he’s a good form tackler. Just watching him, he always seems to be around the ball and in the right position to make plays.”

Ravens Assistant General Manager Eric DeCosta said this about Clark when asked about players who stood out to him during training camp.

At King’s Fork, he played under Joe Jones and was a first-team All-Eastern Region selection at defensive back and was the Southeastern District Defensive Player of the Year both his junior and senior seasons. He went on to Virginia Tech and became an All-ACC defensive back.

The Ravens will play the Jacksonville Jaguars Sunday in London. Suffolk natives can check local listings for the game, which starts at 9:30 a.m. The game can also be streamed online at Yahoo.com. Clark wears No. 36.