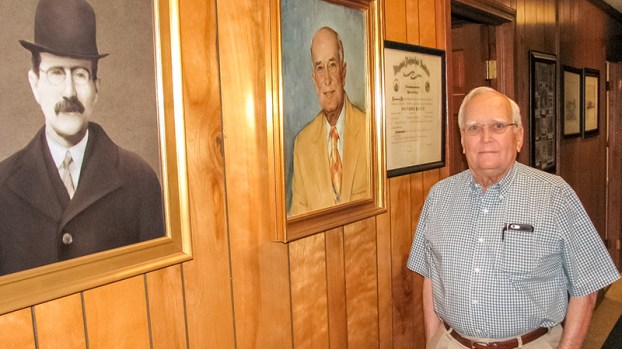 John Harrell, Suffolk’s 2017 First Citizen, shows off portraits of his grandfather and father in the hallway at the family business, Suffolk Iron Works. The business is more than 100 years old and has grown to include more than 80 employees.

First Citizen to be honored Tuesday

Suffolk’s 2017 First Citizen is too humble to say much about the many community service efforts in which he has been involved, but he will brag about the results.

Simply being on boards and doing things doesn’t sound like much, but for Harrell, the results speak for themselves.

A reception honoring Harrell will be held Tuesday at the Suffolk Center for Cultural Arts. Profits from the event help fund the charitable donations in the community through local Rotary Clubs.

Harrell, 78, was on the board at Nansemond-Suffolk Academy for 10 years. He was chair of the building committee for eight years, during which the school completed an addition as well as the middle building, which serves as the cafetorium.

“It’s been good for the community, I think,” Harrell said. They have a lot of functions down there.”

He has been on the board of the Birdsong Trust Fund for many years, which helped start the Suffolk Family YMCA and has provided significant monetary support to numerous community efforts.

“He is a great example of what good citizenship is all about,” said Leroy Howell, who, along with his son, Ralph, nominated Harrell for the First Citizen award. “He’s gone above and beyond the call of duty to serve this community. He’s always willing to chip in and do his part and more.”

But Harrell deflects most of the praise, even when it comes to the growth in his family business, Suffolk Iron Works.

“My son has had a lot more to do with the growth than I have,” Harrell said. “We’ve got a lot of smart people working here, and my son has been a tremendous businessman.”

Harrell is a native of Suffolk and 1957 graduate of Suffolk High School. He started working at the family business, Suffolk Iron Works, at the age of 14. After graduating from Virginia Tech in 1963 with a bachelor’s degree in industrial engineering, he joined his father in the family business, which has now been in operation for more than 100 years.

“He is probably one of the smartest Hokies I’ve ever known,” joked University of Virginia alumnus Billy Chorey Sr., who is on the Birdsong Trust Fund with Harrell. “He’s probably, without a doubt, one of the most resilient, strongest individuals I’ve ever known. He always has an upbeat attitude and is an encouragement to me. If John Harrell’s your friend, you’ve got a friend for life.”

When he came to work in the business, it had about five employees in a small building. It now has a much larger building on about 10 contiguous parcels of land it has purchased throughout the years, and about 80 employees.

The business has given many young people an opportunity throughout the years.

The business has seen a lot of changes over the years. When the local peanut industry declined, Suffolk Iron Works lost a lot of business. But it has since replaced that business and more with work in shipyards, the power generation industry and more.

“We work all over Tidewater,” Harrell said of the steel-fabrication business where he is chairman of the board and treasurer. His main duty is to manage the business’s fleet of vehicles, cranes and machine tools.

Harrell served his country in the Army National Guard and, in addition to the previously mentioned organizations, has served his community on the board of the Virginia State Chamber of Commerce and Central Fidelity Bank, as president of the Suffolk Lions Club and the Suffolk Rotary Club.

He is a member of West End Baptist Church, where he serves as the treasurer.

Harrell is married to Mary Lawrence Harrell and has a son, Clifton, daughter, Mary Marshall, and five grandchildren.