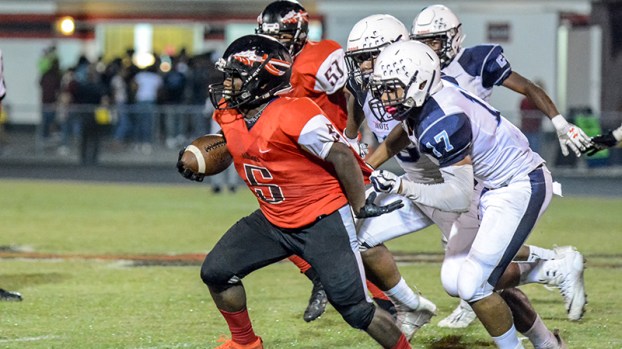 The Warriors are now 3-1 after taking a 26-10 home loss to Indian River High School Friday night.

It was the battle of the unbeaten as the Nansemond River High School Warriors and the Braves matched up. Nansemond River started the first quarter off with a strong offensive series, but it ended by a fumble that was recovered by Indian River. However, after forcing a three and out, Nansemond River came back on their following drive and scored with a Kori Riddick rushing touchdown.

On the following possession, Nansemond River went three-and-out. Indian River tried to put points up before the half, but the Warriors forced Indian River to turn the ball over on downs. At halftime, the score was tied 7-7.

But Indian River took all the momentum in the second half. In the third quarter, a 17-yard touchdown pass and missed extra point put the Braves up 13-7. At the top of the four quarter, Nansemond River had a nice drive that put them in position to kick a field goal, which Evan Lomax made from about 20 yards out. Lomax kick cut the lead to 13-10.

After the Nansemond River kick, Indian River scored 13 unanswered points, which sealed the deal for the Braves to continue their undefeated season.

“Penalties and not executing hurt us out there,” Riddick said of the Warriors’ performance.

Wali Faulk added about 80 yards rushing in the game.

The Bulldogs got their first homecoming win in more than four years as they defeated Grassfield High School 47-14 Friday... read more