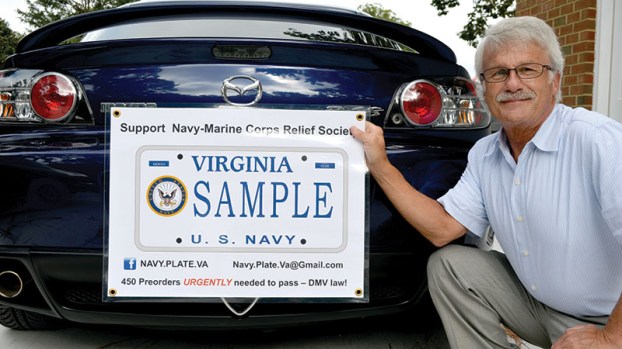 Roger Hirsh holds an image of the Navy license plate that he’s campaigning for behind his Mazda RX-8.

Western Branch resident Roger Hirsh grew up in the military and raised a Navy family with his fellow Navy veteran and wife Chris.

Now he is working against the clock to support other Navy families.

Roger Hirsh enlisted in the Navy in 1971 and met his future wife, Chris, shortly after. The two were married at the Naval Medical Center Portsmouth in 1974.

Their 32-year-old son, Justin, is a network engineer at the Lockheed Martin Center for Innovation in Suffolk, and their 36-year-old daughter, Jennifer, served three years as a pharmacy officer in Great Lakes, Ill.

“I knew that he was very much for the military, and I always knew that was going to be our life,” Chris Hirsh said.

Roger has about 30 combined years of active duty as an enlisted hospital corpsman and later a pharmacist.  He now leads a personal campaign for him and other Navy veterans to express their pride with a Virginia license plate.

Roger realized about 10 months ago that there wasn’t an option to get a Navy plate for a car in Virginia. He has since worked with the Department of Motor Vehicles, the Navy Trademark Office, and his state legislative sponsor, Delegate S. Chris Jones, to change that.

“The process has been a learning experience, for sure,” Roger said. “I don’t think I realized when I first got into it how complex a process it is, how frustrating a process it is, and how many players there are.”

His car is filled with brochures, magnets and other material showcasing the design for the potential plate. He has paid for all of this himself with no sponsorships.

“I’m on a first-name basis with the crew at the OfficeMax,” he said.

A car magnet is always on display when he’s driving, and according to Chris, he constantly shares his quest and brochures with strangers whenever the two go out shopping or grab a meal.

“He spends every waking minute on this,” Chris said. “He puts so much heart and soul into it, so much time and energy, and it’s costly. I’m very proud of him, if a bit frustrated.”

The cost of the plate, if approved, would be $25 annually or $35 if it is personalized. It’s a DMV revenue-sharing plate, and the Navy-Marine Corps Relief Society would receive $15 of the annual fee after the initial 1,000 plates are sold.

“(The NMRCS) do a world of good for Navy families in Virginia and those stationed elsewhere,” Roger said.

Military plates require a minimum of 450 paid preorders before the General Assembly can authorize them. Roger’s goal is to reach that number before December so Jones can introduce the bill at the General Assembly session in January. If the bill were to pass, the governor could sign it in March, and it would become law in July.

After repeating the same conversation more than a hundred times to different individuals and groups, Roger had received fewer than 100 preorders as of Monday. He will have to wait until the next General Assembly session in 2019 if he doesn’t make this deadline.

“Obviously, I would rather not prolong that,” he said.

The Suffolk Department of Fire & Rescue was called out Sunday when a man thought his wife was in danger... read more