Suffolk Treasurer Ronald H. Williams Sr. has been named vice chair of the Board of Trustees of the VACo/VML Pooled OPEB Trust.

Williams was elected Sept. 8 at the annual meeting of participants in the trust. He is in his second year of serving on the Board.

The VACo/VML Pooled OPEB Trust manages the assets invested by political subdivisions to fund retiree health insurance and other post-employment benefits.  Local governments that invest in the OPEB Trust reduce the long-term cost of providing benefits by as much as 40 percent.

Founded in 2008, the trust currently manages $957 million in assets, the largest of its kind in the nation. 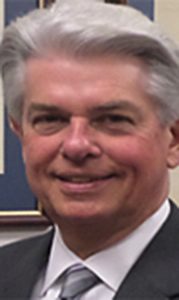 “I am honored to have been asked by my peers to serve as vice chair of the VACO/VML OPEB Trust Board as we oversee the safeguarding and investment of retirement funds of public employees in Virginia”, Williams said.

Williams was elected Treasurer of Suffolk in November 1981 and has been re-elected to eight successive four-year terms without opposition since 1985.

He is a member and past president of the Treasurer’s Association of Virginia and has received multiple awards for his leadership, including Virginia’s Treasurer of the Year in 1997.

He serves on the State Non-Arbitrage Program Advisory Council, and was a founding member of the Board of the Virginia Investment Pool of VML/VACo Finance.

Williams received a Bachelor of Arts in political science with an emphasis on state and local government from Old Dominion University and is certified as a Master Governmental Treasurer by the University of Virginia Weldon Cooper Center for Public Service.

Good leaders connect with their people

By Elaine Lankford Clara Barton will forever be remembered as the most influential woman in the nursing profession. Though she... read more