Sarah Stansick was voted the Suffolk News-Herald Player of the Week after a hat trick and five assists in a 13-0 field hockey victory for the Lady Cavs over Booker T. Washington High School.

Stansick is a junior at Lakeland High School. Lately she has been putting up some impressive performances for her team. She followed the Booker T. effort with a three-goal performance against Hopewell High School. The junior says her increased confidence has improved her performance this season.

“I just feel more confident,” she said. “The team has a stronger bond, and we really want to work hard for each other. Grit has been an integral part of the goals I have scored this season.”

Every practice is an opportunity to learn something new for Stansick and another chance to give it her all. She never wants to leave the field asking, “Could I have done more?” 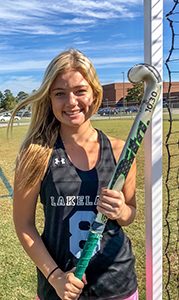 Sarah Stansick was voted Suffolk News-Herald Player of the Week after a hat trick and five assists in a 13-0 victory for the Lady Cavs over Booker T. Washington.

“I just try to take everything I learn from practice and incorporate it into a game,” Stansick said.

Lady Cavs coach Cortney Parker sees those very things in the junior, whether in practice or at game time.

“She is a very coachable player, and she works extremely hard during practices and games,” Parker said. “She is the type of player that if I tell her to do something she takes (it) and I don’t have to tell her again, because she has picked it up and she has learned it. Just a coachable hard-working player.”

One of Stansick’s primary goals this season was to score a lot. She also wanted to get better at moving without the ball.

Stansick is goal-driven and a team leader. She demonstrates those leadership skills by encouraging her teammates and directing on the field. Knowing that teamwork is the key to success, Stansick mentally walks herself through the game to know where she needs to be and how to give and receive support from teammates.

Stansick is inspired by her coach, who believes in her and recognizes the effort she puts in.

“Coach Parker has taught me key elements that I execute when I’m playing, and she is very patient,” Stansick said. “I know I can talk to her about anything, even if it isn’t field hockey-related. I have so much appreciation for her.”

But Stansick’s success isn’t confined to the field hockey pitch. She is enrolled in the Principles of the Biomedical Sciences Program and is a member of the National Honor Society. She is also in the process of starting a Red Cross club at Lakeland, and she volunteers at Portsmouth Naval Hospital.