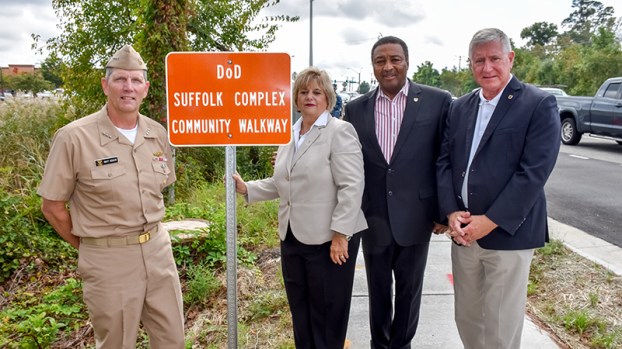 Along with celebrating more than 200 years of stalwart service, a ribbon cutting ceremony was held on Tuesday by U.S. Navy in Suffolk to recognize a gift from the city.

The ribbon was cut on the new Department of Defense Suffolk Complex Community Walkway by Mayor Linda Johnson and city councilmen and Vice Adm. Matthew Kohler, commander of Naval Information Forces, along with other Navy officials.

The sidewalk runs adjacent to College Drive from Lakeview Parkway to Burbage Drive and provides a safe and convenient path for thousands of military and civilian employees at the Department of Defense Complex and Lakeview Technology Park.

“This is just a small token of the debt of gratitude we owe you every single day,” Johnson said at the ceremony. “You keep us safe, and we’ll do everything we can to keep you safe.”

Personnel have previously had to cross College Drive and back again for lunch and dinner at Chipotle Mexican Grill, Chick-fil-A and other restaurants on the other side of the wetlands on College Drive.

Measuring at more than 1,500 feet, the new path allows staff to get meals with ease.

“It just shortens the whole process,” said Capt. Bradley Kinkead of Naval Network Warfare Command. “Traffic is no longer impeded by people trying to get through, and the people no longer have to play ‘Frogger.’”

The path is also a new connection with the surrounding community, according to Capt. Julia Slattery, commanding officer of Task Force 1020 of the Navy Cyber Defense Operations Command.

“It’s amazing that something as straightforward as a sidewalk makes such a difference,” Slattery said. “It makes us safe, and it’s a very important link into the community.”

Construction began in November 2016 and officially completed on July 20.

The $600,000 project was added to the Capital Improvement Plans for Fiscal Year 2016 to 2025 and went through several concepts. Plans had to minimize the impact on the federally protected wetlands in the space, according to City Manager Patrick Roberts.

“This is one of the largest, most important workforce centers in all of Southeast Virginia, and it’s right next to one of the busiest retail and commercial corridors in Hampton Roads,” Roberts said. “This is probably every bit as busy as the sidewalk in front of the Godwin Courts building.”

The group moved into the Information Warfare Hall of Heroes Auditorium inside the Department of Defense Complex to join other service men and women, cut cake and celebrate the 242nd birthday of the U.S. Navy this Friday.

Army, Air Force and Marines were also in attendance to show united support for prisoners of war and those missing in action.

Independent celebrations will be held by Navy personnel across Hampton Roads and the country to honor the men and women committed to their missions around the world.

“It reminds us of who we are, what we are and why we do it each and every day,” Ruiz said.

Alumni and faculty who had been connected to Tidewater Community College’s first campus gathered in Suffolk with friends and family... read more