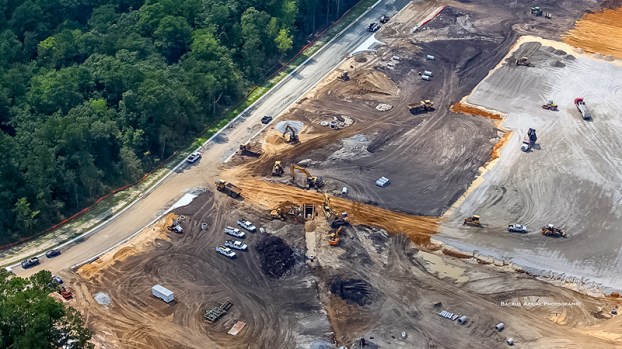 Enterprise Drive, a nearly-finished path in Suffolk’s CenterPoint Intermodal Center, will be the paved connection between Centerpoint Drive and the Peet’s Coffee roastery under construction. (Submitted Photo)

Constructions crews are making progress on a multi-million-dollar economic development project in Suffolk thanks to a new, nearly-finished road.

Enterprise Drive at Suffolk’s CenterPoint Intermodal Center is the connection between CenterPoint Drive and the site of the first Peet’s Coffee roastery on the East Coast. About 85 percent of the road work is complete, according to Suffolk Economic Development Director Kevin Hughes.

The base layer has been lain with a layer of asphalt on top for an uneven surface that’s still able to support vehicles and equipment transportation. The remaining two to three inches of asphalt won’t be added until enough construction has been finished at the roastery to prevent any damages, Hughes said.

California-based Peet’s Coffee announced in December its plans to invest $58 million dollars in the new roastery. The 175,000-square-foot roastery is expected to create 135 new jobs, with an average annual salary in the $50,000 range.

Hughes said infrastructure is being installed on site, including water. A stormwater pond was completed to prevent flooding and minimizing erosion. More preparations need to be made before concrete starts to pour and the foundation is complete, Hughes said.

Gov. Terry McAuliffe praised the project in December as further diversification of Virginia’s economy, and a reinforcement of Suffolk’s “Caffeine Capital” claim.

J.M. Smucker, Massimo Zanetti Beverage and Lipton already process coffee and tea in Suffolk, and companies like Continental Terminals, Pacorini, Vitex Packaging Group and Crown Cork and Seal are involved in facets of the business such as importing and packaging.