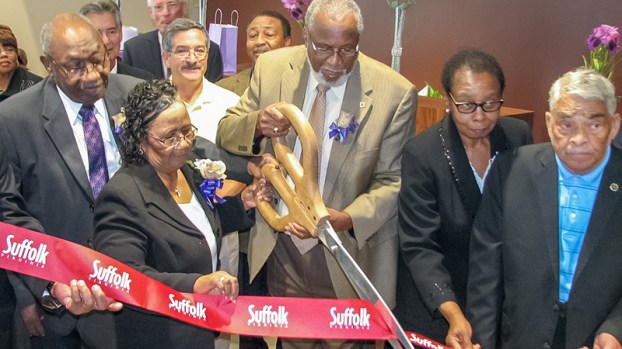 After more than three years of work, the Metropolitan Church Federal Credit Union officially opened its new building on Saturday.

“It has been a tough road, but we have gotten to a point we have finally gotten the building completed,” Ronald Hart, manager of the credit union, said during a ribbon-cutting ceremony Saturday morning at the new location, 133 Tynes St.

The credit union is moving from its spot on County Street on the next block, which was a converted and expanded home.

“This is a great day for Suffolk and the Fairgrounds, and it’s been a long time coming,” Vice Mayor Leroy Bennett said during the ceremony, referring to the plan to revitalize a historic core of black-owned businesses near East Washington Street.

The Phoenix Bank, which still stands on East Washington Street, once served as a black-owned bank that would work with black customers when other banks in town wouldn’t. But the bank closed in 1931.

“The credit union has taken that spot,” Bennett said Saturday. “It’s good we can come together and work together as a community to make things better. We all are working together to better our communities and our fellow man.”

Hart talked about the history of the credit union during Saturday’s event.

The credit union started in Lamb’s home, but that didn’t last long.

“The auditor said that was not going to be,” Hart said Saturday, drawing laughter from the dozens in attendance.

It moved to the office of the Sunday school library in the church, where workers and members had a tight fit until 1984, when it moved into a vacant home behind the church.

Rufus Hart Sr., Ronald Hart’s father, was manager of the credit union for many years.

“One of my father’s last wishes was to find a plot of land to build a credit union on,” Hart said. That didn’t come to pass, but Hart is confident his father can see the results of his effort.

“I know he and Rev. Lamb are smiling today,” Hart said. “It’s my hope and vision the credit union will continue to grow.”

The Federal Energy Regulatory Commission on Friday issued a major approval needed for the Atlantic Coast Pipeline to be constructed.... read more