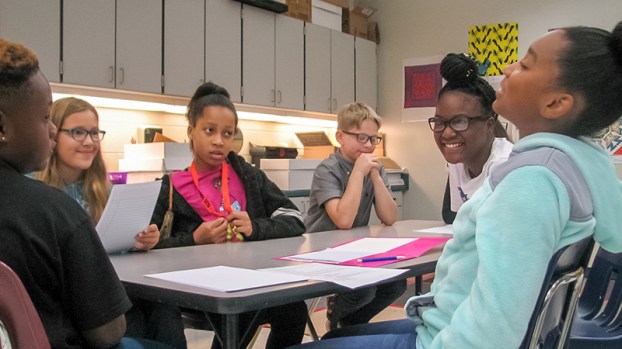 A handful of students at Mack Benn Jr. Elementary School spent part of Tuesday morning learning about parliamentary procedure and contemplating a prize for each student to receive at a school-wide assembly.

The school has started a student council, and more than 20 students have been delegated this important task.

“This is a very coveted, very important job that you have,” Principal David LeFevre told council members during their Tuesday morning meeting. He told the students he would hold their behavior to a very high standard.

Art teacher Lydia Dommel and music teacher Rachel Summers started the student council to give students an opportunity for a leadership role and to allow them to take ownership of what happens in the school.

“This was something that could help get the kids involved,” Summers said.

The council includes one representative from each third-, fourth- and fifth-grade class. The entire second grade also elected a president this year, and that student, Nyshaun Lewis, was also included.

Dommel said a letter was sent home with model students, inviting them to run for the council seat. Each student who wanted to run made a video, which was shown to their classmates, and the classmates then voted for their representative.

The first meeting on Tuesday included the officers, who learned about things like presenting the minutes of a meeting, tabling a decision and adjourning the meeting. The council will meet right after buses discharge its members at school on the third Tuesday of every month.

The officers also looked at options for a prize to be given to each student at an upcoming school-wide assembly intended to promote good behavior. They had to do math to determine how much the options would cost to order enough for all 700-plus students.

“They’re excited about it,” Summers said. “It gives us a different perspective, too.”

A member of the Nine Trey Gangsters was sentenced Tuesday morning in federal court to 45 years in prison for... read more