“I believe relationships are the most important thing in the world,” said Donald C. Solomon.

Solomon was chosen as the permanent pastor at Great Fork Baptist in June, after having served as the interim pastor since January.

Solomon, 75, first felt called to the ministry as a teenager. He was raised in Baptist church in Mississippi. 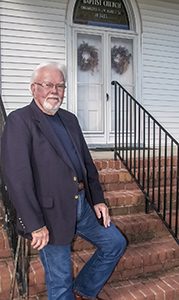 “I felt a significant leading from that Lord that I would be in some phase of ministry,” he said.

He attended Southwestern Baptist Theological Seminary and has been in the ministry for 52 years. For much of that time, he has also had a parallel career in Christian counseling.

He currently maintains a counseling office in Franklin, where he spends 10 to 12 hours a week while working about 25 hours at the church.

Solomon has spent most of his career in Virginia, including 30 years in Virginia Beach. In the ‘80s and ‘90s, he led a ministry that did street ministry and worked with the homeless and transient populations.

Most recently, he was assistant pastor at Courtland Baptist Church and also has been teaching psychology and religion at Paul D. Camp Community College.

Solomon said he has enjoyed his time so far at Great Fork Baptist, and his congregation apparently feels the same way.

“We got along wonderfully,” he said of the congregation during his interim period. “They liked me, and I liked them.”

The church has about 60 to 70 active members, Solomon said.

“It’s a small church; however, smallness is a good thing sometimes,” he said. “The important thing is this is a good church, and by that I mean the people here are very good people.”

“I want us to be in deep fellowship with each other and good ministry to the community,” he said. “It’s a privilege to be allowed to lead this good church.”

The church held a community gathering on Oct. 4 with games and a cookout. Solomon said it was a success.

“We had a wonderful time,” he said.

Solomon and his wife have two grown children and 11 grandchildren. The oldest grandchild is married and expecting the Solomons’ first great-grandchild soon.