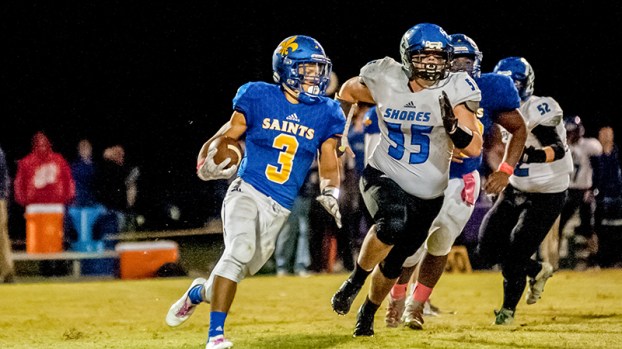 Nansemond-Suffolk Academy improved to 5-4 on the season after a 56-26 win over Atlantic Shores Christian School.

NSA has scored 119 points in its last two games. The Saints have shown in different games this year they can be an explosive team, and that showed on Friday night. The win allows NSA to stay in the playoff hunt though they have yet to secure their bid.

“We didn’t start as fast as we would have liked, but when we needed to make plays we did,” Saints coach Mike Biehl said. “We have to find ways to start faster, but I will take the win all day.”

Erek Smith had a big night for the Saints with four touchdowns. Robby Tew tossed three touchdowns and also rushed for one. Biehl believes that Ehron Knight had his most complete game of the season, with a couple of scores on offense and an impressive defensive performance.

With only one game left in the regular season, Biehl wants to see his team display urgency not only for the game but also for preparation during the week as well. He wants to approach the last game as if it is a playoff week.

“We have a tough opponent coming into our place,” Biehl said. “We have to make sure we are focused and that we approach this game like it’s week one of the playoffs. We just want to be urgent in everything we do this week.”

NSA will take on Hampton Roads Academy for the last game of the season.

The Warriors got back in the win column Friday night with a dominating 63-0 win on the road against Great... read more