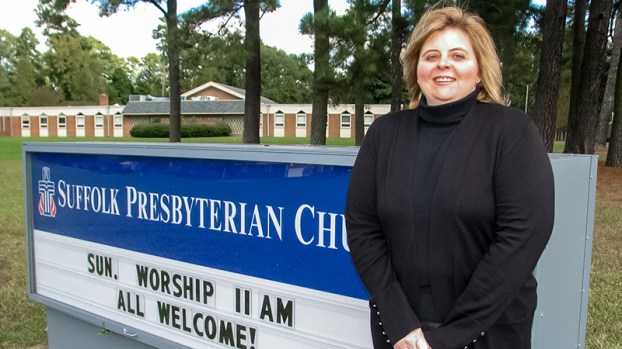 The Rev. Julie Sterling is the new pastor of Suffolk Presbyterian Church. She was installed on Oct. 15.

The new pastor of Suffolk Presbyterian Church is committed to social justice ministry and making the church a place where all are welcomed.

The Rev. Julie Sterling was officially installed as the church’s pastor on Oct. 15, but the 43-year-old has been the pastor since May 1.

“I’m really excited to see what happens next,” she said. “We want the church to be an open place for everyone, without question.”

Sterling comes to Suffolk from a low-income Appalachian area. Her most recent call was at First Presbyterian Church in Buckhannon, W.Va., near the site of the January 2006 Sago Mine explosion that killed 12 miners. The mine was shut down about a year later and never reopened, putting many people in the area out of work.

Sterling’s West Virginia church ministered to the impoverished people in the area with a food pantry and other initiatives that helped the people, she said. The last year she was there, she also was a part-time chaplain at a local hospital.

But last year, she felt it was time to move on, and she started the process. It moved more quickly than she could have imagined, and she had offers from a couple of churches by February.

She chose Suffolk because she was intrigued by the service the church has done, including its founding role in starting the Edmarc Hospice for Children and simultaneous outreach to children with disabilities, among other projects.

“As I interviewed with this group, I learned they were very thoughtful,” she said. “I feel in love with them from Day 1.”

Already, the church has taken initiatives such as doing its first Blessing of the Animals and offering its sanctuary for prayer and reflection following the August rally in Charlottesville that led to violence and three deaths.

“I’m trying to allow my congregation to bring these issues up organically,” Sterling said. “Hopefully they will be excited to do more things in the future.”

Suffolk Presbyterian Church, located at the intersection of West Constance Road and North Broad Street, has only about 40 attendees on most Sundays, Sterling said. But the small group works hard, Sterling said.

“This congregation has really impressed me so far because of their hard work and dedication,” she said. “There’s a clear sense of ministry to what they’re doing. I’m thankful for everybody and everything they do for the ministry. I’m also thankful for the choir, because I’ve been in churches where there wasn’t one.”

Sterling said she and her husband, Eric Sterling, are enjoying Suffolk so far.

A Suffolk native will join a conference of scholars, professors and poets this weekend to share thoughts and insights about... read more