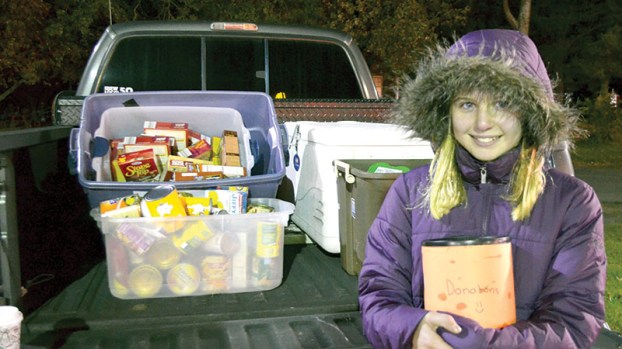 Ella Shiner, 11, shows off the food and monetary donations she collected on Friday at the McDonald’s parking lot in the Western Branch community of Chesapeake.

An 11-year-old girl in the Western Branch community of Chesapeake once again helped those in need this weekend.

Ella Shiner was out in the bitter cold Friday evening with her parents, Michelle Styron and Shawn Shiner, her stepfather, Scott Styron, and her little brother, 9-year-old Chase Shiner. They were collecting food and monetary donations in the McDonald’s parking lot at the intersection of Portsmouth Boulevard and Dock Landing Road.

“It seemed to be such a mild fall, then this turns out to be the coldest night of the year it seems like,” Michelle Styron said with a laugh.

Ella and her family collected three frozen turkeys, more than 75 cans of vegetables, about 75 boxes of mashed potatoes and stuffing and $250 in cash donations that evening from friends, family and others.

“She’s an amazing kid,” Western Branch resident James Finch said after he dropped off his donation.

In November 2016, Ella held a coat drive at the New Creation United Methodist Church Aldersgate Campus in Chesapeake. She did that drive because she was too young to volunteer with her mother at a soup kitchen, so she found another way to make a difference.

Ella ended up collecting more than 300 coats for Portsmouth Volunteers for the Homeless. She was so overjoyed by that experience that she decided to do another drive this year, she said.

“She was already thinking about what she wanted to do for this year as soon as she finished the coat drive,” Shawn Shiner said.

Ella said she didn’t want to stop collecting Friday evening because she knew she was going to help people, even though her fingers were numb.

“It was fun,” she said. “It makes me feel happy knowing that I helped somebody.”

A portion of Bob White Lane in Suffolk will be closed to public motorists beginning Tuesday. The section of Bob... read more