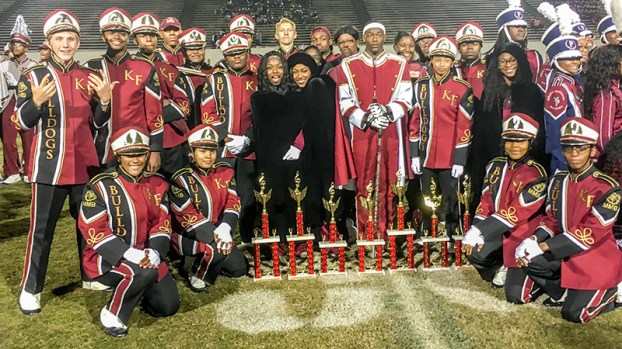 Drum majors and section leaders from the King’s Fork High School Mighty Marching Bulldogs celebrate wins at a recent band competition. The band had an impressive amount of success this year, bringing home more than 25 trophies from various events.

The Mighty Marching Bulldogs of King’s Fork High School had a successful season that brought more hardware to the trophy case.

The marching band was listed as grand champion of three events, hosted by Greensville County High School, Hopewell High School and Highland Springs High School. That brought its total to 11 times in the last four years it was the top band at an event.

The band also competed in the High Stepping National Competition, which included 25 bands from Virginia, Tennessee, Georgia, North Carolina and South Carolina. The band came away as the Division 3A national champion and took third place overall in the entire event.

Sections of the band also earned more than 25 first-place trophies this season in individual categories such as flag, majorette, dance, drum major, drum line, marching and music, said Bernard Bradley, who is in his fifth year as the band director.

Such excellence is becoming the norm for King’s Fork High School.

Senior Brandon Wilson, who plays alto saxophone and is a co-section leader, said the experience of being in band has been a good one.

“It’s been a very good experience just coming in and learning from not only Mr. Bradley but also (upperclassmen),” Wilson said. “It’s not just playing music. We have to put our differences aside and work for a greater goal. I think it’s wonderful we come from different walks of life, but we all come together under music.”

Junior Emily Acosta, who plays piccolo and also is a section leader, said she got more than she bargained for when she joined the Marching Bulldogs.

“I came to get better on my instrument, but I found a family,” she said. “When you’re a band, you’re not just friends, you’re family.”

Bradley said he stresses fundamental musicianship, sticks to a plan and relies on the support of parents and the administration to help make the band successful.

The band currently has 97 members, and Bradley hopes to grow that to about 125 in coming years.

“I think it’s important to get more kids involved for the opportunities,” he said. “Music is becoming a very viable tool for earning scholarships.”

“I want to make King’s Fork a musical hub, where schools know they can get a quality student from here — not just Virginia schools but schools across the nation,” he said.