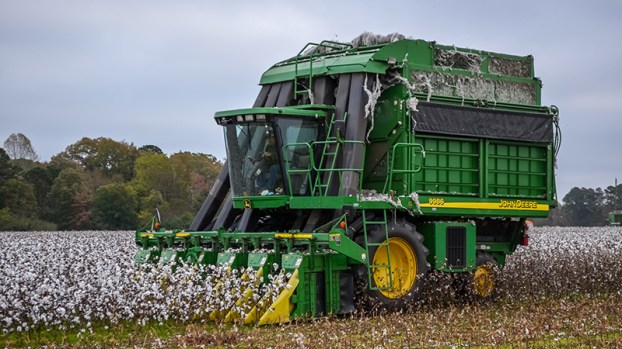 Shelley Barlow and her family were harvesting their cotton crops in the damp air and mud on Wednesday. Like other local farmers, Barlow is concerned about the consistently wet weather and what it means for crops.

“Everyone is very frustrated,” Barlow said. “We have a good crop in the field, but we can’t get nice weather to get it harvested. I think it’s just getting on everybody’s nerves.”

Farmers have been delayed by days and weeks of rainfall this year. This has pushed the Barlows to pick their cotton in less-than-ideal conditions.

“This is borderline true wet,” said Shelley’s son Joey Barlow, 33. “Ideally you wouldn’t want to be in the fields now, but at this point, we need to get the crop and worry about the fields later.”

David Bosselman said he just finished harvesting a good crop of peanuts, which could have been even better had it not been for a week of rain in October. His corn, while not as market valuable, also turned out a good yield.

He said he hasn’t harvested any soybeans yet, because he’s waiting for the weather to cooperate.

“I’m just waiting for it to stop raining and dry off,” he said.

Mike Griffin, who farms in southern Suffolk, said his as-yet-unharvested soybean crop looks good. This is likely because he planted them later than cotton this year, thereby avoiding particularly heavy bouts of rainfall.

“I’m sort of anxious to get into them and start that harvest,” Griffin said.

A Thursday press release from the Virginia Farm Bureau Federation shares that enthusiasm for soybeans.

According to the Farm Bureau, Virginia soybean production is expected to total 26.6 million bushels in 2017, a 23-percent increase compared to 2016, per the U.S. Department of Agriculture’s National Agricultural Statistics Service.

“Remember, corn prices have been in decline since mid-2014,” Harper stated. “And a lot of corn producers in the U.S. and Virginia generally are only near break-even economically with average yields. So one reason beans are up is that they’re less expensive to grow, and there’s more profit in beans,”

According to Harper, this was the largest soybean crop in history for five years in a row.

“That’s as unprecedented as a football team winning the Super Bowl for five years in a row,” Harper stated.

Despite that good news, the weather continues to dampen farmers’ spirits.

“It may seem cliché, but when I was a kid growing up on the farm, rain showers would come through, then the sun would come out, and we would get back to work,” Griffin said. “Now it seems like it will rain for two to four days, enough to stop us from doing any work in the field.”