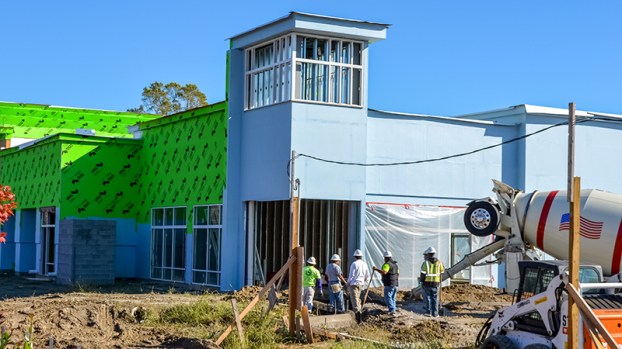 New retail centers on Harbour View Boulevard are expected to be complete this December, with new retail and dining options coming next year.

New shopping and dining options on Harbour View Boulevard are on their way to opening next year.

The larger building of approximately 13,000 square feet is expected to be finished for tenants to begin moving in on Dec. 1, while the 7,000-square foot building will be turned over on Dec. 15, Viloria said.

Bad weather caused more than three weeks of delay during construction, including more than 30 days of rain since ground broke on April 24, Viloria said.

“We had numerous rain days where we were able to work inside,” he said. “You got to do what you got to do.”

The new Zoë’s Kitchen restaurant will open mid-spring, Public Relations Coordinator Madeline Stone stated in an email. She said the store will bring approximately 30 new jobs in the community.

The Metro Diner is scheduled to open early March, Director of Marketing Crafton Bryant IV stated in an email.

A Rawls Christmas: cowboys and goats

Frank Rawls’ favorite Christmas memories involve a goat, a cowboy outfit and a Christmas Eve meal, although thankfully not all... read more