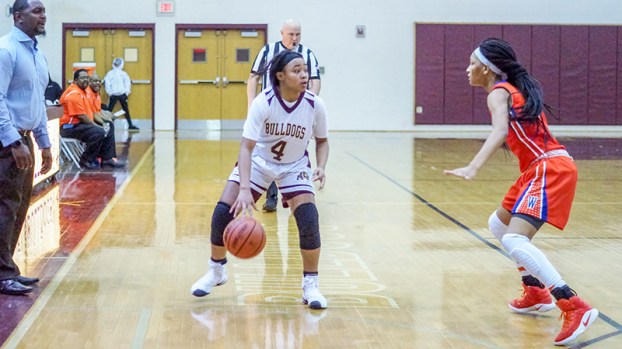 Senior Camary Harris returns as one of the leaders for the King’s Fork High School girls’ basketball team this season. Caroline LaMagna Photo

The Lady Bulldogs return to the court this season among the top programs in the Class 4 level.

Last season was one to remember for the King’s Fork High School girls’ basketball team. The Lady Bulldogs finished with a 24-6 record last year, which included a conference championship. They were also 4A East Region runner-up and were the 4A state runner-up. It was the first time in school history the Lady Bulldogs had advanced to a state championship.

Once again this season, King’s Fork will be regarded as one of the top girls’ basketball teams in Hampton Roads and throughout the state.

In each of the past two seasons, the Lady Bulldogs have exceeded their finish from the previous season. During the 2015-16 season, King’s Fork was eliminated in the 4A state semifinal. Last season, they advanced to the state championship but lost in a tight game to Monacan High School.

This season could be the year the Lady Bulldogs take it all, but they will have to do it without Amesha Miller. Miller was a standout in the King’s Fork program in the previous four years, racking up many personal accolades and becoming one of the elite players in Hampton Roads and throughout the state. She is now at the University of North Carolina at Greensboro.

Things will change without Miller, but Lady Bulldogs coach Maurice Fofana believes his team will be able to manage. They return senior and Bethune-Cookman University signee Camary Harris. Along with Harris, King’s Fork returns Neecole Brown, Nylah Young and Brianna Copeland, who all played significant roles for the team last season.

Because the Lady Bulldogs will not have Miller’s presence in the post, their offense will look a bit different this season. With the talent King’s Fork has on the perimeter, its offense will likely be centered around its shooting ability.

“We are going to have to work harder,” Fofana said. “Some things will change for us as we adjust without Amesha’s presence.”

Fofana believes last season’s failures will motivate the players this year as it has in the past. Everyone has a bitter taste in their mouth about how last season ended and will turn that into motivation.

“A championship is a goal of ours,” Fofana said. “But you can’t get to March without taking care of things in the months prior. “I feel like our players are battle-tested and will definitely help us achieve our goals.”

The journey to a state championship will begin Friday when the Lady Bulldogs go on the road to face Indian River High School at 7 p.m.