The Warriors football team is having a season for the ages. They have already exceeded anything that has been done prior to this season. They have the most wins in school history and have been on the longest winning streak while also becoming regional champions. A big part of the success the Warriors have had this season is attributable to Harrell.

However, Harrell is more thankful for Nansemond River’s losses than for its wins, because it allowed the Warriors to see the things they needed to change to turn their season around. He is most thankful for the change in the offense late in the season. The junior said he knew the offense was going to be effective when they first learned it.

“We weren’t even executing it like we should have, and it was still working,” he said. “I knew once we got it right, we were going to be unstoppable.” 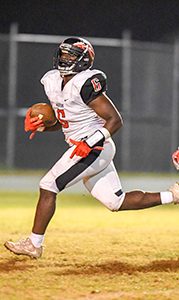 Harrell plays on both sides of the ball for the Warriors and got it done on both ends last weekend against Salem High School. Harrell’s second touchdown tied the game, and kicker Evan Lomax brought it home with the extra point.

The game featured every emotion possible. Harrell called it a great experience to go through that game with his teammates.

“It was a great experience just being with my brothers and just watching everyone stay positive,” he said. “We had some scary times during that game, and we never gave up.”

The junior looks at himself as one of the leaders on the team. In those crucial moments in the game where Harrell was getting the ball, he knew he had to make a play and is grateful his teammates had trust in him to make it.

Nansemond River’s mission to achieve the team’s first state championship is what motivates Harrell. He takes pride in being one of the leaders on the team, and that too drives him to make plays for his team.

Warriors line coach Phelton Payne is someone who inspires Harrell. He credits the coach as one of the main reasons the team is so close. Future NFL Hall of Famer Ray Lewis is also someone Harrell draws inspiration from for his leadership and his play on the field.

Harrell reminds himself that he doesn’t have it easy, and that also inspires him to be the best he can be on the field. He hopes one day to turn his career into a dream where his parents do not have to work anymore.

Playing as hard as his body will allow him and motivating his teammates were two things Harrell had on his checklist to achieve before the season. There is one thing he wants to happen as do his teammates and that is to win a state title. If the Warriors do that, Harrell believes he will have set out to accomplish all he wanted this season.

Harrell described football as his life, so most of the time he is working to get better at it, whether he is watching film or studying other players. Other than that, he is trying to achieve academic excellence for his future.