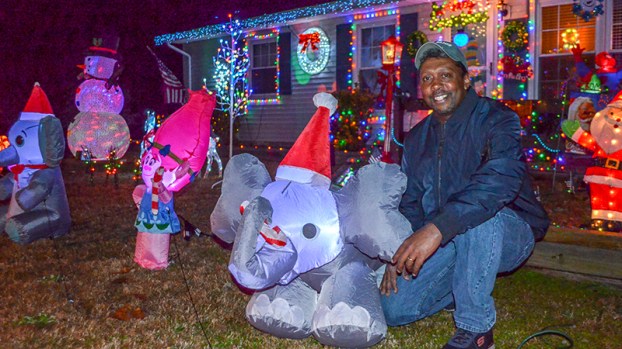 Ruben Durand adds an inflatable elephant to his Christmas display each year on his Lane Street property. The elephants are for his granddaughter Lilianna Rayne, 1, who loves the animal, Durand said. “I’m going to cover this place in elephants by the time she’s 18,” he said.

Ruben Durand really likes Christmas. So much so, in fact, that he’s once again transformed his 2,300-square-foot home on Lane Street in Whaleyville into a winter wonderland.

Durand has been collecting holiday decorations for about 18 years, he said. The Navy veteran started putting up decorations in honor of his late grandmother, Pebtria Ojeda, who passed away in 2000 during the Christmas season.

“I just want to keep her spirit alive,” he said.

He started with a few strands of lights until his wife, Catherine, convinced him to make his decorations look neater, he said.

“I want to make it as neat as possible,” he said.

The tradition begins around Thanksgiving to set the stage for all kinds of lights and sounds, which consumes his time when he’s not working as a quality assurance project supervisor at Norfolk Naval Shipyard.

“My friends say my house is easy to find when I get my lights up,” he said.

Thousands of blinking lights are strung up around inflatable polar bears, elephants and even Spiderman with a sack of gifts on his back.

A projector inside his house plays a full-motion Santa Claus clip on his window. Another Santa Claus is dressed like a soldier to celebrate veterans. Christmas music is played on stereo speakers.

Durand’s decorations won the WAVY Holiday Lights Contest in 2013, and have been treats for his daughters, Gabrielle Mitchell, 23, Julianna, 20, Alexandria, 15, and his 1-year-old granddaughter, Lilianna.

He said his neighbors have followed his lead each year as he added mechanical reindeer, Santas and more decorations. His street is steadily filling with cheer.

The pilot was uninjured in a crash in southern Suffolk on Saturday, Virginia State Police confirmed on Monday. The crash... read more