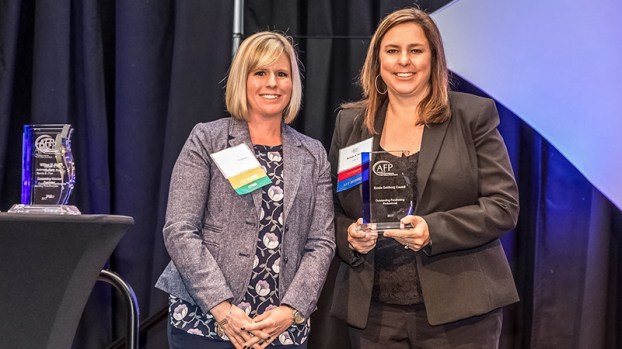 Council, who is director of advancement at Nansemond-Suffolk Academy, received the Outstanding Fundraising Professional Award at the group’s National Philanthropy Day luncheon on Nov. 9 at The Main in Norfolk.

Council said she was humbled by the award but attributed all of her success to others.

“I really believe it’s a team sport,” she said. “It takes a lot of people to make you successful when you’re in philanthropy.”

Council said her colleagues at NSA, the school’s administrators, donors, volunteers and others all have helped the school’s fundraising be successful.

Council has been working at NSA for 14 years. She oversees the annual fund, capital campaign and planned giving, as well as events coordinated by the advancement office, such as the annual art show and sale. Recently, she oversaw a capital campaign that raised more than $7.5 million to support a strategic expansion.

NSA is more than just a job for Council, though; it’s a family affair.

She and her husband, Michael, met in preschool as students at NSA. They both graduated in 1991. Both of their mothers taught at NSA, and now both of their daughters, Maren and Aubrey, go there.

“It’s my dream job,” Council said of working at NSA. “I was coming home; that’s what it felt like.”

“I want to make that experience available for generations to come,” she said. “It’s a very special place.”

Council is a James Madison University graduate. Her community involvement doesn’t stop at NSA; she is also a member and past president of the Suffolk Rotary Club, past chairman of the city’s United Way campaign, past board member of Riddick’s Folly and is a member of Ohef Sholom Temple in Norfolk.

Council is also a certified leader by the International Advancement Certification Program for Advancement Professionals by Independent School Management. She is also a longtime member of the Association of Fundraising Professionals and served on the Hampton Roads chapter’s board of directors from 2011 to 2016.

Other honorees at the event included:

Suffolk police are investigating a commercial armed robbery that happened Wednesday night. The robbery at the Speedway in the 1500... read more