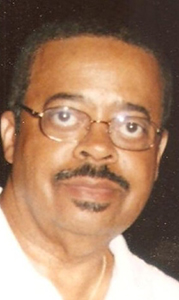 Jerome C. Branham, 73, passed away peacefully at home surrounded by his loving, care-giving wife, family and friends on Dec. 5, 2017.

Born in Washington, D.C., to the late Debruedell Branham, Jerome was predeceased by his parents, the late Chester M. and Helen M. Walker; brother, Maurice Walker; and nephew, Antwain Simpson.

After graduating from the Washington, D.C., public school system, he began his career with the Department of State, moving on to IBM, Bank of America and later the City of Suffolk, where he later retired for the final time. He was a faithful member of Covenant Community Church in Suffolk.

Jerome is survived by his wife of 12 years, Jennifer O. Branham; son and daughter-in-law, Jerome and Angela Matthews; stepdaughters, Felicia Davis and Terri Owens, and stepsons, Archie Boone and Aaron Boone; grandchildren, Diamond and Miles Matthews and Jasmine, Jerrell and Rashawn Davis, and a host of other grandchildren, nieces, nephews, cousins and his very special uncle, Robert Walker, and a host of spiritual sons and daughters.

Funeral services will be held at noon Tuesday, Dec. 12, 2017, at Covenant Community Church, 3504 Robs Drive, Suffolk, VA 23434, officiated by Pastor Harold McPherson. Burial will follow at Nansemond-Suffolk Cemetery.  Friends may join the family for a time of viewing and visitation from 6 to 8 p.m. Monday, Dec. 11, 2017, at the church. In lieu of flowers, donations can be made in support of Jerome’s Journey—The Fight against Prostate Cancer.