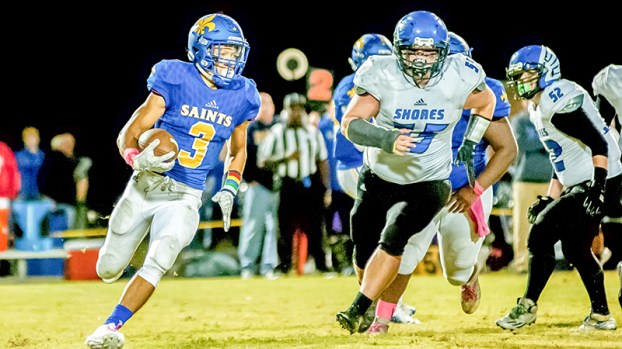 Four to play in 757 All-Star Classic

Four Suffolk natives will have the opportunity to step on the field one last time this weekend at Powhatan Field at Old Dominion University for the 757 All-Star Classic.

Deondre Little, Erek Smith, Gerard Stringer and Harlen St. Louis will all be playing in the game, which pits the Peninsula against the Southside.

Little will be one of two Lakeland High School football players to compete in an All-Star game this weekend. DeAndre Faulk will be competing in the I-64 Bowl. Little is grateful to have the opportunity to step on the field one last time to represent Lakeland and the city of Suffolk.

The senior had a strong year for Lakeland, making first-team Southeastern District at wide receiver, and also became an all-region receiver as well. He is excited about his last opportunity to make plays in high school.

“It’s pretty fantastic,” Little said. “Just looking at my jersey again is a blessing. Never thought I would be able to play again and to represent my school in front of other college coaches. It is just an overwhelming feeling.”

Little believes being able to represent Lakeland is very important, because he believes he will show that the Cavs are capable of churning out good athletes. Also, attending Lakeland for four years has given him the motivation to do the best he can for his school.

“This is a chance to boost Lakeland and show that we breed athletes even though we are a 3A school,” Little said. “I just want to give back since the school, staff and people have helped me become who I am today.”

Smith is also grateful for another opportunity to be able to represent Nansemond-Suffolk Academy. He was an all-conference and all-state performer over the course of his last three seasons. Like Little, Smith wants to show the type of talent his school carries as well.

“People around this area really don’t know NSA well,” Smith said. “So, it is my job to show people what kind of talent we have here.”

NSA finished with a 6-4 recorded this season, and Smith felt like he did all he could to help his team accomplish that feat. With this being his senior season, he wanted to leave the program with it in good shape, and he feels he has done that.

Stringer is the 2017 5A Region Defensive Player of the Year, and he and St. Louis will represent Nansemond River High School for this game. St. Louis is an all-district and all-region offensive lineman this season. Everyone is excited to be able to represent the city for the last game.

“I feel honored to be able to play one more game with some elite players,” Stringer said.

“It’s really a blessing I get to play the sport I love one more time at the high school level,” St. Louis said. “I get to play with my teammate again and others in the area.”