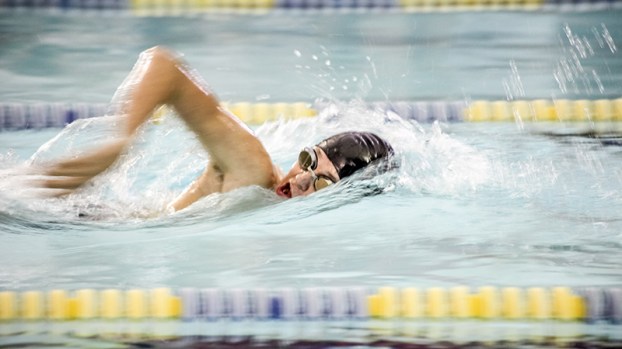 Brandon Eubanks returns as one of the top swimmers of the Warriors boys’ swim team. Melissa Eubanks Photo

Warriors off to great start in pool

After a successful 2016 swimming season, the Warriors are primed to be even better in 2017.

Through three swim meets, Nansemond River High School’s swim teams have gotten off to great starts. The boys’ team is 3-0, and the girls’ team is 2-1. The boys’ team returns what coach Shamus Riley called the most talented boys’ group he has coached. Even though the girls return a young team, they too can have a successful season.

Returning for the boys are Allen Zachary and last year’s Suffolk News-Herald Winter Player of the Year, Brandon Eubanks. Zachary recently competed in the Junior Nationals. He has competed in one high school meet so far and qualified for states in both events. Hunter Ward is also another productive swimmer who is expected to qualify for states. Other swimmers including Clay Bennett and Andrew Betts are all swimmers Riley described as stars. 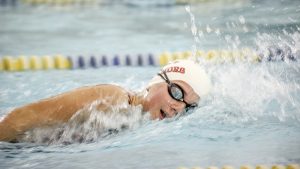 Their closest meet so far has been against Lakeland High School, where they won 110-56. They followed that up with a win against Indian River High School 123-42. Last Saturday, they defeated Oscar Smith High School 127-39.

“A lot of these guys have the experience of qualifying for states before, and I see them doing the same thing again,” Riley said. “They all know the expectations this year, and they are all dedicated and are pushing themselves to get to that next level.”

On the girls’ side, Nansemond River returns Selby Heyman, who qualified for states as a freshman last season. They will also have Kristiana Zachary, who is Allen’s sister. Both Kristina and Selby have pulled each individual team records except for one. Zachary has broken three school records since she has been swimming for Nansemond River.

Last season, both the girls’ and boys’ teams hit a school record in total wins. This year, Riley expects the boys’ team to exceed its total from last season. It is a possibility for the girls’ team, but they are young. Riley just wants his teams to continue to drop times and hopes for the best for both teams.

“Our girls’ team is young,” Riley said. “It is a lot to build off of, but the goal is to continue to drop times. I’ll be happy with the results.”

Nansemond River’s last meet before winter break will be this Saturday against Great Bridge High School. Riley hopes to go into the break with some momentum, with the boys going to 4-0 and the girls’ team improving to 3-1. The meet will be held at 4 p.m. at the Great Bridge Swim and Racquet Club.

Four to play in 757 All-Star Classic

Four Suffolk natives will have the opportunity to step on the field one last time this weekend at Powhatan Field... read more