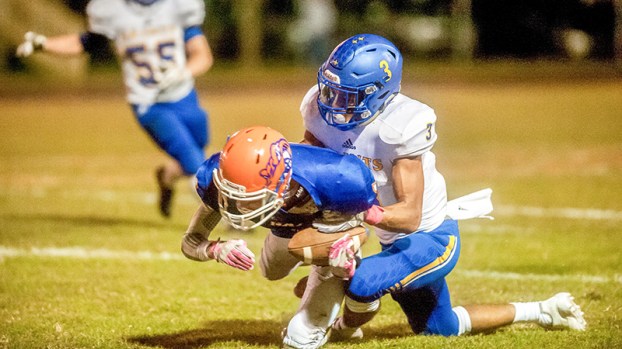 Erek Smith was voted first team all-state at defensive back for Nansemond-Suffolk Academy. Five other Saints also made the all-state teams.

NSA finished its season with a 6-4 record, barely missing out on the playoffs. However, the Saints still were able to get their fair share of postseason awards.

The Saints had five players make the Virginia Independent Schools Athletic Association Division-II all-state first team. Senior Robby Tew headlined as the first-team quarterback. Tew had a big season, becoming the all-time leader in touchdowns for NSA. His performance also placed him on the first team in the all-conference selections.

“This season was pretty cool. It’s definitely something I will remember,” Tew said. “It was disappointing that we didn’t make the playoffs, but it was very memorable, and I miss it every day.”

Zac Morris, Ehron Knight and Chris Murphy joined Tew on the first team at wide receivers and offensive line, respectively. For Morris, it was a huge accomplishment. A shoulder injury ended his season early last year, and he was able to bounce back this year. Knight also made an all-state team last season as well. Murphy was also excited as well to see that his hard work had paid off. His goals for his senior season were to stay healthy and make both all-conference and all-state, which he did.

“This was a big accomplishment, especially because my injury set me back last year,” Morris said.”

“I was glad to see that my hard work and dedication on the field and in the weight room finally paid off for me during my senior season,” Murphy said.

Erek Smith made the first team at defensive back. Smith made plays on both sides of the ball for the Saints this year. Like Knight, Smith also was selected as an all-state player last season.

“It felt great knowing that the hard work paid off,” Smith said. “I am happy I am able to get recognized for it.”

NSA also had two honorable mentions in George Pettaway and Griffin Duggan. All of the players that made all-state made all-conference as well.

“This season was a huge step forward from last season,” Morris said. “We kept getting better and better as the season went on.”

Senior Juan Marrero has decided where he will continue his baseball career. The King’s Fork High School senior will play... read more