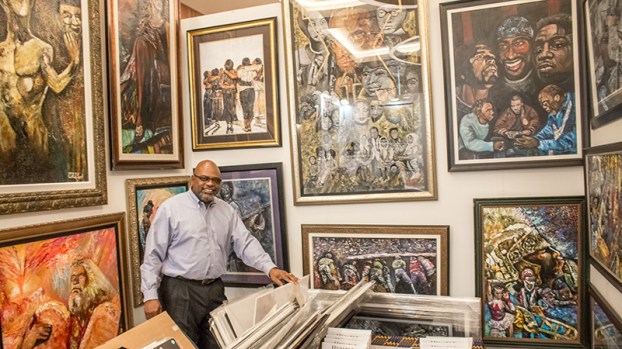 Tim Giles observes the art at the Harlem Fine Arts Show in Chicago where he won the Malcolm X T-shirt contest.

Suffolk was represented at the Harlem Fine Arts Show hosted at Malcolm X College in Chicago in mid-November.

“There were two parts for me doing the show. Sterling and I wanted to travel and look at Malcolm X College,” Giles said of himself and his grown son. “I also thought it would be neat to enter the contest.”

Giles spent about six months with his art spread across his dining room table before the show, trying to perfect the T-shirt. His inspiration came from a different perspective of Malcolm X. 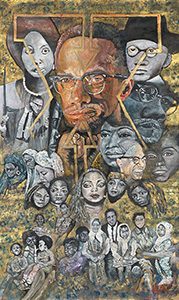 The winning submission for the Malcolm X T-shirt contest by Tim Giles.

“It was pretty easy,” he said. “You see a lot of regular stuff about Malcolm, but I wanted my painting to show a human part of him. We look at our leaders as gods sometimes, so I wanted to make him more human. I just want to tell a story, and I get an opportunity to use my skill as an artist to show the human side of things. That’s what I saw in Malcolm.”

With the win in his back pocket, Giles is going to tackle an even bigger stage. He will be attending the Harlem Fine Arts Show in New York City.

The art show will stretch across four days from Feb. 15-18 and will feature only a handful of other artists from all over the world. Giles will have a booth featuring an array of his works, and he will also be selling his winning T-shirt from the Chicago show.

Giles wants to make Suffolk proud and his mother proud.

“Mary Alice Daniels. That is my first inspiration,” he said. “She bought me my first paint-by-number set. She has always been in my corner.

“I just want to represent Suffolk. I want to be known as one of the greatest artists that have ever come out of Suffolk.”