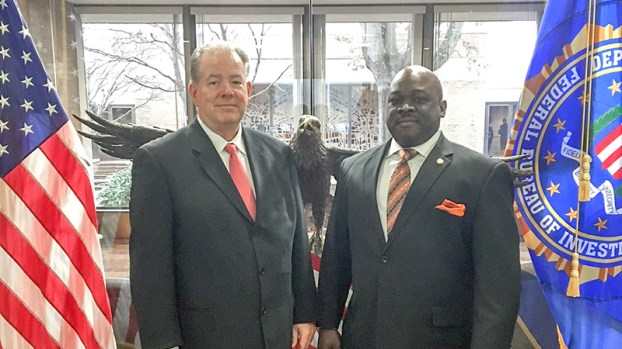 Suffolk Police Department Capt. Alfred Chandler, right, pauses for a photo with Police Chief Thomas Bennett at his graduation from the 270th session of the FBI National Academy at Quantico on Dec. 15. City of Suffolk photo

Suffolk Police Department Capt. Alfred Chandler graduated from the 270th session of the FBI National Academy at Quantico on Dec. 15.

Along with Chandler, there were 221 other law enforcement managers ranking at lieutenant and above from all across the country. There were also law enforcement officials from other countries in attendance as well.

This isn’t the first time the Suffolk Police Department has participated with the FBI National Academy, and Chandler was honored to be recommended by the department. After some extensive paperwork, Chandler was accepted into the academy and spent three months in Quantico learning new skills.

“One of the classes that I took was contemporary issues in law enforcement. It dealt with a lot of issues happening nationally and internationally, the sharing of ideas and seeing different perspectives,” Chandler said. “It was a great benefit to me in my career, and it gave me further confirmation that the Suffolk Police Department is on the cutting edge on the most difficult issues facing law enforcement today.”

“We address difficult issues like race relations and body cameras and all of the pros, cons and legal hurdles to developing a program. Also messaging and branding through mediums such as Facebook and the importance of those types of programs in getting your message out to your citizens,” Chandler said.

The Suffolk Police Department has been utilizing social media, Facebook and Twitter as a way to relay its messages to the public. The police department has already experienced body cameras, Chandler said.

During the three-month stint in Quantico, Chandler had the opportunity to be taught by instructional staff and special agents who are well recognized in their field of expertise. These teachers brought real-world examples to the students in the academy.

“We actually had a chance to tour the hostage rescue team for the FBI. That was in a course that was geared towards hostage negations and indecent management,” Chandler said. “Some of the speakers, they brought in real-world cases, and we were briefed by people actually involved with these cases.”

Part of the communication training at Quantico involved learning about how social media platforms can misconstrue messages to the public. Chandler said this topic was one of the harder things he had to do because he is naturally “more straightforward and up front.”

“It was great having the opportunity to look at a lot of messages and see how it can be misconstrued. It was awesome,” Chandler said. “We were interviewed by actual journalists and they went through a process to see if they could trip you up or get you off message.”

Staying away from Suffolk for three months was not the easiest feat, but the accomplishment and experience Chandler got from the academy made it worth the distance. Chandler’s father, wife and two of his children were able to attend the graduation ceremony.

“It was a tremendous honor to be a part of the 270th session. I was really proud to stand alongside some incredibly gifted law enforcement executives. I got to learn a great deal, and I am feeling better about the strength and management of the Suffolk Police Department,” Chandler said.

Schools get another snow day

Suffolk Public Schools will be closed again on Tuesday for students due to lingering snow and ice on secondary roads... read more