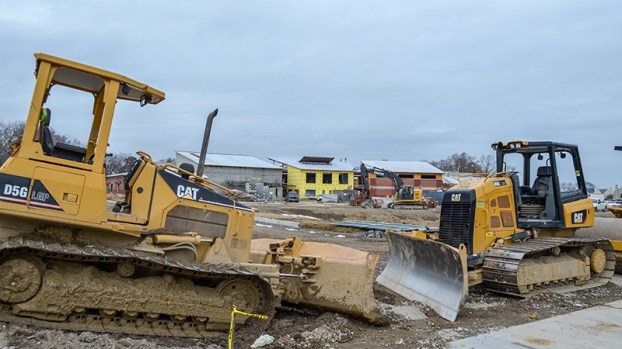 Construction equipment at the Col. Fred Cherry Middle School takes a rest after the snowstorm two weeks ago. The project is ahead of schedule despite weather delays.

Suffolk is on pace to introduce more than 1,000 students to new learning spaces this fall.

Norfolk-based contractor Blueridge General is heading construction of the Florence Bowser Elementary and Col. Fred Cherry Middle schools, both of which were designed by RRMM Architects.

As of Friday, the middle school is about 60-percent complete, while the elementary school is at about 65-percent, according to Blueridge General President Eric Stichler. Both projects are at the point where more than 100 workers are on site each day, he said.

Despite snow and other inclement weather, both schools remain on schedule to be built by late spring. 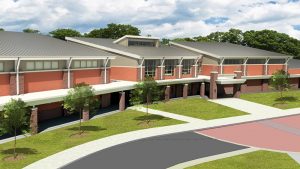 “We were impacted a little bit by the snow — more so on the middle school — but we’re back on track,” Stichler said.

Col. Fred Cherry Middle School on Burbage Drive was named by a unanimous School Board vote in February, honoring a Suffolk native who was held prisoner of war in Vietnam for more than seven years and died in 2016.

The two-story, 125,200-square-foot building will relieve overcrowding at John Yeates Middle School with more than 25 classrooms to accommodate about 800 students.

According to the RRMM Architects website, the school’s design is an update on a previous prototype for Suffolk Public Schools that incorporate multiple project-based learning environments and offers a classroom extension for adaptable and collaborative learning spaces.

“Coupled with flexible furnishings, the latest technology and creative design solutions, the spaces are intended to stimulate and inspire students, enhancing their educational experience,” according to the website.

Florence Bowser Elementary School on Nansemond Parkway is named after an educator who taught in Suffolk and other Virginia localities for more than 50 years.

Contractors are installing windows, finishing roofs and handling masonry work for both projects as they move closer to interior finishes, Stichler said.

“They’ve already installed ceiling grids in some of the classroom spaces, and once we start flooring in the next two months, we’ll be pretty much exclusively on the inside of the buildings working on those interior finishes and getting those classrooms ready,” Stichler said.

He expects to turn the middle school over to Suffolk Public Schools this May and the elementary school this April.

“They’ll have all summer to get themselves set up in there,” he said.

A local expert was in Suffolk Monday to talk about the realities and opportunities facing college students in today’s world.... read more