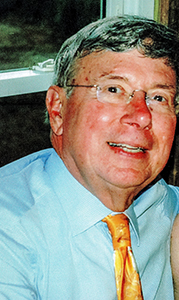 Richard Goldbach wrote a book about his service of 34 years as the CEO of the Metro Machine Corp.’s shipyard in Norfolk. (Submitted Photo)

Richard Goldbach decided that as he grew older he didn’t want his stories to disappear when he died, and he decided to write it all down in a memoir titled, “Building Shipwright Success on Life’s Miracles.”

Goldbach’s memoir was published by Cherry Grove Plantation LLC on Dec. 18 of last year, and the book is currently available on Amazon.

The book takes the time to navigate his 57-year long career in the shipyard industry, of which the last 34 years took place at Metro Machine Corporation. The running of the business, as well as when Goldbach sold it, were some of his most successful endeavors.

“More than anything else, it was the workers took their work very seriously,” Goldbach said of what made the business successful. “The workers knew that what they did was important, and they knew what they did was appreciated by the others in the company.”

Metro Machine Corp. was unique in many ways, but what made it most unique was its relationship with each and every employee that worked there.

“It’s quite unusual to have an enterprise that makes an attempt to share all its success financially in some kind of fair way with all of its workers,” Goldbach said. “It’s almost unheard of. I think that all of us working together were successfully able to do that. I think it helped that it was a cause I believed in.”

Goldbach wasn’t motivated by his own financial wealth, but rather, his motivations were to make sure that any financial success was evenly distributed between the workers. It was important to help them live a reasonably comfortable life, Goldbach said.

The phenomenon of the company continued in 2011 when Goldbach made the decision to sell Metro Machine Corp. to General Dynamics Corporation. The decision wasn’t a difficult one for Goldbach, because he was invested in what was best for the shareholders, who were the workers.

“It had difficult aspects, but the decision was easy, because I was obligated to make it by my arrangement with them. It required me to do everything I could do to benefit the shareholders,” Goldbach said. “And when this proposition came along, unsolicited, I was obligated. I had to look at it, and when I did, I concluded that the worker benefited from the particular path.

“It was in excess of what I was likely to do continuing in business. It wasn’t a legal obligation. It was a moral obligation.”

This story was bound to be told, but Goldbach wanted to pen the words himself.

“I pulled out all the old papers and letters. I said, ‘Wow, there are some things in here that if I don’t do something about, it will disappear when I die,’” Goldbach said. “I just decided that I didn’t want that.”

Last year, Goldbach had the inclination to start writing, and this was a beast he had yet to tackle. Despite some grammatical errors, Kim Rouse, Goldbach’s consultant, wanted to keep the story true to Goldbach as much as possible.

The two worked together to make sure the book was something Goldbach was happy presenting to the world.

“Most of the deletions were things I had been unhappy with and talked about, then nobody wants to read about what you are unhappy about. Lo and behold, when I took them out of the book, I took them out of my head,” Goldbach said.

Hair Cuttery, the largest family-owned and -operated chain of hair salons in the country, is kicking off the 19th year... read more