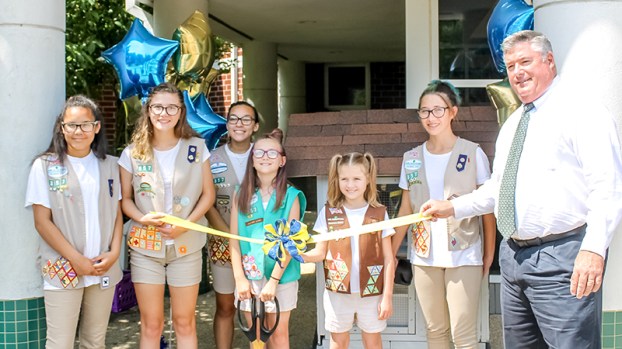 Paige Starkey stands at Mack Benn Jr. Elementary School in front of her little lending library which is the biggest in the area. (submitted photo)

Paige Starkey wanted to give back to her community and to her school, and she did that by putting a little library in front of Mack Benn Jr. Elementary School.

“I built it so that kids would have the pleasure of reading all year, because it is open year-round,” Paige said.

She wanted everyone to be able to read all year, because not everyone has access to books during the summer months.

The project was first conceived last year, but it was never done. This year, Paige decided she was going to take on the challenge.

It was quite a challenge for Paige and her mother, Jennifer Gomes-Laffey, as they repurposed a chicken coop for the library.

The project, once finished, was deemed the Biggest Little Library, and it sits by the pick-up and drop-off area of the school.

“I’m very proud of her. Paige is very caring and very attentive to other people,” Gomes-Laffey said. “When she said she wanted to do her Bronze Award, she wanted it to help as many people as possible.”

Paige had the help of her mom and friends to make the library possible, and Paige had the opportunity to learn how to use different tools.

“I learned how to use some tools I’ve never used before,” Paige said. “I got to use a power drill, but the best part was doing this with my family and friends.”

“She wanted to do something to benefit the community, because after this year she is no longer going to Mack Benn. She will be going to John F. Kennedy Middle School,” Gomes-Laffey said. “This is very much Paige. It’s just her personality.”

Her Bronze Award required her to do, at a minimum, 20 hours of work on the project, and the project took her and her friends about a week to complete, Gomes-Laffey said.

Before she could attempt the Bronze Award, she had to complete her Junior Journey with the Girl Scouts and make a detailed plan for the library. The project has to make a difference in the community.

An Italian youth program found its way to Lakeland High School, and now two students will be headed to Italy... read more