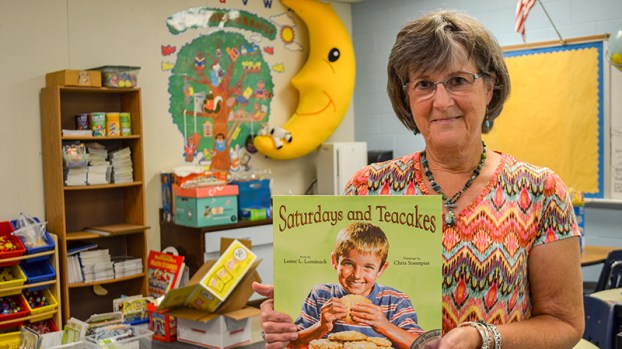 Deb Rasberry, a first-grade teacher at Kilby Shores Elementary School for the last 19 years, will retire at the end of this semester. One of her favorite books to read to her students has been “Saturdays and Teacakes,” written by Lester L. Laminack.

When she’s not taking pictures with her Nikon camera, Deb Rasberry is writing in one of her many journals.

She keeps them in her house, her car and her classroom, where she’s been teaching first-graders at Kilby Shores Elementary School for the last 19 years.

“I probably have a story for each grandchild already,” she said. “I even have one grandson writing. He went camping with us in Pennsylvania last summer. We camped by a stream that had these beautiful cows. I happen to like cows, so Carter and I wrote a whole story about those cows by the stream.”

Rasberry will retire from Kilby Shores this year after showing roughly 500 children how to read or write since 1999. It also marks the end of her 41-year teaching career that started in Hanover County before 21 combined years at James Hurst and Douglass Park Elementary Schools in Portsmouth.

She and Mike, her husband of 42 years, moved for his Portsmouth construction job, then moved to Suffolk in 1979. She joined Kilby Shores because she wanted to teach in the same school system that taught her sons David and John, now ages 35 and 29, respectively.

But she did enjoy her 30-minute “prayerful drive” from Suffolk to Portsmouth to prepare her for work back then.

“It takes a lot of prayer to be a teacher, or at least a good one, I think,” she chuckled.

At Kilby Shores, she’s been Mrs. Rasberry to students and “Raz” to coworkers, or “the wordsmith” that cultivated discipline in her students, according to Principal Lorri Banks.

“Her classes can move down the halls in ‘stealth’ mode,” Banks wrote in an email. “She is able to make 20 or more 6-year-old students walk or sit so quietly in the halls that if you didn’t hear them breathing, you would not know that they were there.”

“She has wonderful control of her class in a soft-spoken manner,” wrote bookkeeper Sheila Morris.

Media specialist Allison Greene asked Rasberry’s students to describe her in one word. They responded with words like “extraordinary, cheerful and nice,” according to Greene’s email.

Greene’s favorite story about Rasberry’s class was an impromptu writing lesson she gave them when rain canceled outdoor recess. According to Greene, Rasberry brought the kids under the outdoor awning with the rain pouring down. They sat, closed their eyes and used all their senses to describe the rain.

Then they returned to the classroom with brand-new vocabulary words.

“It was such an inspiration as a fellow teacher and helped me rethink how writing should be taught,” Greene wrote in her email.

Faculty and friends have received holiday and birthday cards featuring Rasberry’s prolific photography. Her pictures range from toddlers at the beach to a mission trip, where she taught Bible classes in a sheep pasture in Romania.

“I had my camera close by, because the shepherd would just bring his sheep over the hillside. I got a few good shots of those sheep. They’re probably some of my best pictures,” she said.

She has taught in the youth department at First Baptist Church on Main Street for 25 years and gone on numerous mission trips abroad. She’s sang “the blessing” — a prayer song she picked up in Girl Scouts when she was young — with her students before every lunch break at Kilby Shores, every day.

“I’ll be able to teach children about the love of Jesus Christ. It’s almost like I’ve almost been unleashed.”

Her lessons have produced winners each year in the Suffolk Reading Council’s annual Young Writers contest. Rasberry has had at least one student place first among first-graders in at least one of the categories annually.

“It is a testament to her skill and ability to teach this often-difficult topic,” Greene wrote. “She is a phenomenal writer herself. I am ready to see books written by her in the near future.”

Rasberry plans to spend more time abroad and with her husband, sons and grandchildren Carter, 7, Ella, 5, and Holly, 4, at home. She will be with them at the beach this summer with her Nikon and notebooks.

She plans to finish a book of her as-yet-unfinished short stories. She found encouragement when she had three students place first in fiction, nonfiction and autobiography categories in the contest this year, respectively.

“The children won these first places, and that just told me ‘Deb, don’t give up on what you started,’” she said.

School’s out for summer!

By Alex Perry, Kellie Adamson and Tracy Agnew The children walked into the warm sunshine of Thursday afternoon with cheers,... read more