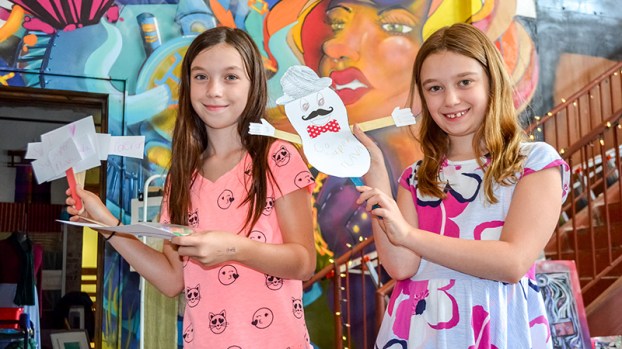 Molly Wells, 10, and Brooke Christy, 10, show their team spirits with their own Mr. Peanuts made at the OnePast7 art gallery on North Main Street during the Amazing Peanut Chase on Saturday.

Chasing for peanuts in Suffolk

Families followed the clues and explored Suffolk on the hot and sunny Saturday afternoon for the third annual Amazing Peanut Chase held by the Suffolk Public Library.

Teams met in the morning at Chuckatuck Library to pick up packets of clues for 11 different locations throughout the city. Each destination was either a recent addition to the community or had an interesting history, according to Library Services Coordinator Shawna LoMonaco.

“It’s a great way to get people walking around town and really explore what’s out here,” said Dave Stacknick, co-owner of Brick and Mortar Brewing Company on East Washington Street, one of Saturday’s puzzling destinations.

There were more than 100 people of all ages across 28 teams this year, each with a fun moniker. The clues tested their knowledge of both local history and recent news. They found what they were looking for in places like the Obici House overlooking the Nansemond River or Col. Fred Cherry Middle School under construction on Burbage Drive.

“If you knew what was going on locally, you had a better shot of figuring out the clues,” said Margie Wiley, who participated with her husband Mark. They went on-the-nose for their team name, “the Coyotes.”

At each location, they collected colored Styrofoam peanuts or took pictures for Facebook with #AmazingPeanutChase. Many of the clues were harder than in the previous two years.

“It was a lot harder than I thought it was going to be,” said Brittany Hamlin of the “Hunting Hamlins.” She was joined by her mother-in-law Cusi Hamlin and her children Nathan, 6, and Ellieahna, 4. They took a video of themselves at Brick and Mortar with their purple peanuts as they sang “Found a Peanut” to the tune of “Oh My Darling, Clementine.”

A few of the locations had activities to flex team spirit. Brick and Mortar visitors drew pictures of Mr. Peanut, while down on Main Street teams were cutting out Mr. Peanut at the OnePast7 art gallery.

“I think it’s awesome,” OnePast7 owner Ed Beardsley said. “Any citywide activity that we can support through the arts initiative, I’m happy to do it.”

Beardsley watched as Molly Wells, 10, and Brooke Christy, 10, decorated their cut-out Mr. Peanuts with beards and hats. Brooke’s dad Arthur Christy came up with the team name “Super FlaVa,” as Molly was visiting Brooke from Florida.

They competed against their brothers Barron Wells, 7, and Joey Christy, 7, who called themselves the “Jellybeans.” The girls were fairly confident that they were finding clues faster than them by mid-afternoon.

“They took a break at Chick-fil-A and we haven’t,” said Brooke as she colored her paper hat gray.

They also made signs out of their team name.

“We get some extra bonus stuff for team spirit,” Molly said.

Everyone returned to the Chuckatuck Library by 3 p.m. for free pizza, drinks and lawn games in the shade. Each team received a raffle ticket for every clue they solved and competed to win one of four baskets filled with snacks, gift cards and other prizes.

Teams “White Winter” and “Mack Trucks” were the raffle winners, and the team that won for the best submitted picture was “Box of Rox,” with Bryan and Ann Harris, their children Emma and Addison and their lovable, eponymous golden retriever named Roxy, who had her own team shirt at the start of the chase.

The winner for best team spirit – back for their third year in the chase– were Ann Lester and Lois Polley, joined this year by Polley’s granddaughter Sarai, 5. They called themselves the “Peanutbutter Buddies” and they were dressed in full clown attire in the June heat. Purple wigs, red noses and signs that exclaimed “clowning around in Suffolk.”

“We definitely drew some attention while we were walking downtown,” Polley laughed.

LoMonaco and her team were impressed by the turnout this year. She wanted people to get involved and check out what Suffolk had to offer, and as families turned in numerous trophies of solved puzzles, she said it was a job well done.

“I just wanted people to enjoy themselves and maybe learn something new about Suffolk,” she said.

The list of 2018 candidates running for City Council and the School Board has been published on the city’s website.... read more