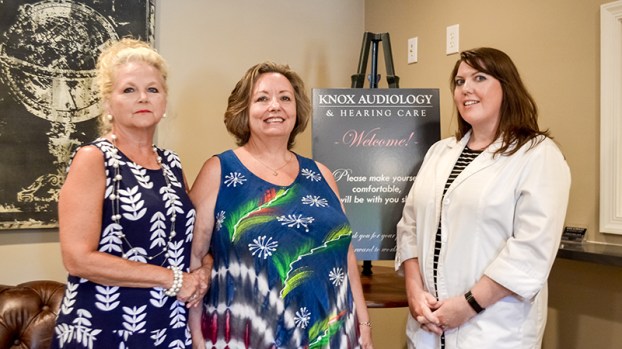 People often take their five senses for granted, especially their hearing. But Smithfield resident Mary Grissom, 60, knows that all too well.

Grissom has been hard of hearing for the past 15 years and has only about 50 percent of her hearing in both ears. She couldn’t watch movies without subtitles or listen to her car radio and generally felt disconnected from everyday life. She especially struggled with holding conversations.

“You get tired of saying ‘what’ and ‘huh,’ so you just don’t say anything,” she said. “You just smile and nod your head.”

At Western Tidewater Free Clinic in Suffolk, where she’s been a patient since 2009, she found the help she needed. 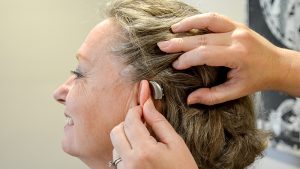 Her aid came from a partnership that started when Chet Hart, the clinic’s executive director, was approached by members of the Bennett’s Creek Sertoma Club at a fundraiser last winter.

The club was founded in 1991 and has between 25 and 30 active members, according to member George Fischer. They hold several fundraisers that typically raise more than $15,000 combined, all of which go to help individuals with hearing and speech impairments.

The members told Hart that they were willing to help a clinic patient that suffered from either. Three of them met with Hart, Charge Nurse Cathy Culvertson, Grissom and Dr. Carrie Knox at the Knox Audiology and Hearing Care office on Western Avenue Thursday to celebrate her brand-new hearing aid.

“Members get a lot of satisfaction in knowing that they helped individuals and from seeing their responses,” said member Mike Smith.

“You see the smiles on their faces and their appreciation,” Fischer added.

Culvertson and others at the clinic were quick to recommend Grissom for this opportunity, who she described as a model patient who rarely misses an appointment.

“We knew it would improve her quality of living, and it obviously has,” Culvertson said.

Hart reached out to Knox for her assistance, and Knox contacted the Starkey Hearing Foundation to secure a hearing aid. They provided a set of Starkey Muse i1000 hearing aids, a very small set — they’re practically hidden beneath Grissom’s haircut — that typically sells for thousands of dollars, but the foundation offered a steep discount.

Knox conducted a hearing test on Grissom, then fitted her with the new hearing aids in May and met her for follow-ups at reduced fees.

“(Patients) are not used to having these sounds that they’ve been missing for a long time, so we bring them back slowly in phases to let them adapt,” Knox said.

Hearing aids typically last for about five to seven years. Grissom’s pair came with a year’s supply of batteries and a new lease on life with the world opened up to her, she said. Even her own voice has been jarring.

“I feel like I’m talking funny, because I’m not used to hearing my own voice,” Grissom laughed.

He passed credit for the whole life-changing endeavor on to other benefactors.

“We couldn’t provide the services that we provide without the support of partnerships that we have throughout the Western Tidewater community,” he said. “Some smart person once said, ‘It takes a village to make it happen,’ and this is a primary example of that.”

Grissom now drives to her appointments listening to her favorite oldies and country stars, from John Denver to Keith Urban. She said she was surprised to hear the chirp of birds when she first walked out of the office with her new hearing aid.

She was even more shocked when she was back at the farm she shares with her boyfriend, Raleigh Clark, where she hears peacocks screech, geese hiss and squawk and a calamity of other noises from roosters, chickens, ponies and other animals.