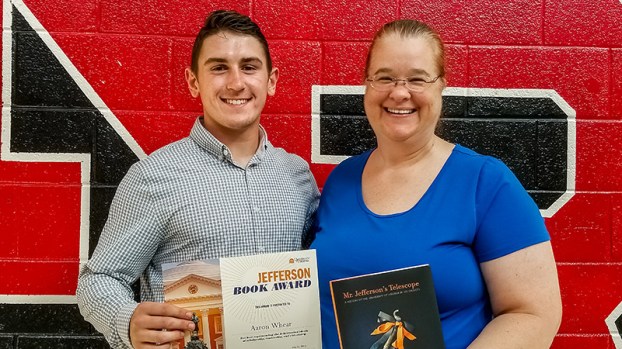 The award is for those who embody Thomas Jefferson’s commitment to innovation, creativity and the spirit of discovery.

Whear believes he embodies those traits.

Whear’s creativity isn’t what most people associate with creativity. Instead of painting or writing poetry, he employs his creativity within the Project Lead the Way engineering program at Nansemond River.

“I’m in the engineering program, and we usually get a creative design project. We get to be creative while we solve problems,” Whear said.

For Whear, being able to come up with creative solutions gives him a sense of pride.

“Creativity makes the like around you more interesting,” he said. “You can solve a problem based on a formula, but being able to be creative and do something your own way is really rewarding.”

The UVA Clubs program partners with high schools around the world, and those schools choose one student for the prestigious honor. The winners receive a copy of “Mr. Jefferson’s Telescope: A History of the University of Virginia in 100 Objects,” a bookplate and a certificate signed by University of Virginia President Teresa Sullivan.

UVA alumna Mary-Linda Cruey, one of Whear’s teachers at Nansemond River, was able to present the Jefferson Book Award to him. Cruey graduated from UVA in 1993 from the Curry School of Education.

Whear wasn’t expecting the award, and he was happy to receive it.

“I didn’t know about it at all. I was surprised, and I didn’t realize it was such a prestigious award,” Whear said.

He had applied for other awards, and when he was asked to attend a reception, he figured it was for one of those.

“I was really proud of myself,” Whear said.

Students from all 11 elementary schools in Suffolk finished their first week of the district’s LEAP program this Friday. The... read more