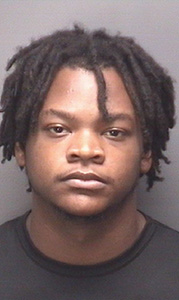 Third arrest made in homicide

A third person has been arrested in connection with the homicide of 26-year-old Brandon Hudgins a year ago on June 30, 2017.

He was indicted on charges of involuntary manslaughter, robbery, two counts of use or display firearm in the commission of a felony, brandishing a firearm, attempt to commit a non-capital offense, conspiracy to commit a felony, possession of burglary tools and wearing a mask in public.

Justin Stephen Fransee, 20, and Joshua James Williams, 19, were also indicted on multiple felony charges, including involuntary manslaughter, conspiracy to commit a felony, street robbery using a gun or simulation of a gun, use of a firearm in commission of felony and solicitation of a juvenile to commit a felony.

The three were indicted by the grand jury on June 27.

Hale also was injured in the shooting. When police arrived, they found him lying in the street in the 300 block of Gloucester Street. He was airlifted to a local hospital in critical condition, according to a press release from the time of the homicide.

Hudgins’ body was discovered roughly 30 minutes into the investigation, lying next to a residence in that block, the press release stated. He was pronounced dead at the scene.