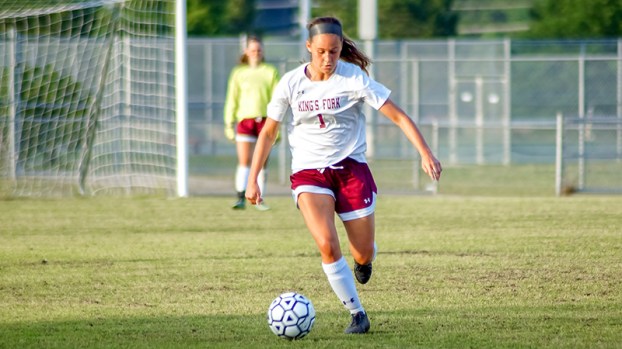 King’s Fork’s girls’ soccer team had its best season in 2017. That team made waves throughout Hampton Roads and the state by falling one game short of a state title berth. It was the first time the school had been that far, and it was a journey that will go down in history.

Wall was a standout on that Lady Bulldogs team. She was an All-Conference, All-Region and All-State selection. Last spring, she signed with Emory & Henry to play soccer, and she immediately came in and made an impact. She was one of two freshmen on the team last year that started and played in every game. She credited her teammates and coaches with helping her make an easy adjustment.

“Everyone made me feel welcomed in the beginning,” she said. “I played on one team pretty much my whole life, so being on another team was weird at first, but I was able to adjust and do well.”

Her confidence is what led her to taking one of the starting spots on the team. She went into every practice with a high energy level and competed hard in every drill. When she chose to sign with Emory & Henry, the biggest thing for her was going into the situation with a positive attitude. She wasn’t sure what she was going to accomplish, but she was excited to see what her future held in collect.

“I knew I didn’t want to come right in and sit the bench,” she said. “I wanted to find any way I could to make an impact on the game.”

During travel ball and high school soccer, Wall played center back. However, her college coach moved her to left back. It was an adjustment she had to make. She had to be confident in her left foot. One thing she has been working on during the spring was being more confident in her left foot. She credits her coaches and trainers over the years who have taught her and put her in position to be a versatile soccer player.

“I have had good coaches and trainers throughout my years of playing,” she said. “They took time to teach us the game of soccer and help us develop.”

EHC and Wall will be back at it again for the new season in August.

Duggan getting attention from top schools

Nansemond-Suffolk Academy rising sophomore Griffin Duggan already has offers under his belt from top programs in Virginia. The future is... read more