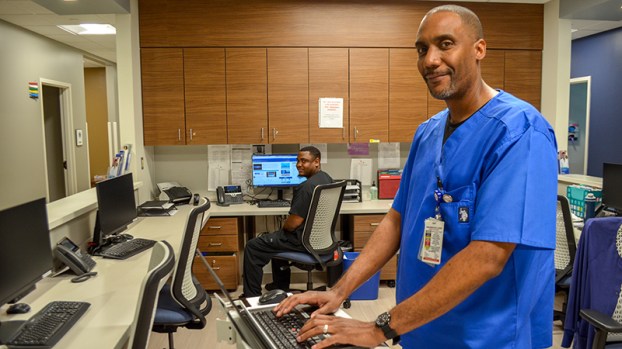 Program for Virginia veterans will continue

A Virginia program that helps veterans find jobs in the medical field was signed into permanence by Gov. Ralph Northam on June 25.

Northam signed legislation that made the Virginia Department of Veterans Services’ Military Medics and Corpsmen program a permanent part of the department’s services. The General Assembly first established the pilot program in 2016, according to a press release.

Virginia is the first state to create such a program for Army Medics, Navy and Coast Guard Corpsmen and Air Force medical technicians.

“Over the past two years, working with our partner health care systems across the Commonwealth, MMAC has proven to be a great success,” Northam stated in the press release.

Shanail Romane, a Navy veteran working at Bon Secours Internists of Churchland and the first female to be hired through the MMAC Program, said she’s been pushing for officials to keep it going.

“I’m glad that it’s become permanent for more veterans to get into,” Romane said in a phone interview.

According to the press release, 43 of them met specific practice qualifications based on skills they learned in the military.

“As a former Army doctor, I worked alongside military medics while treating soldiers injured during Desert Storm,” Northam stated. “Our medics and corpsmen have extensive training and valuable experience, but unfortunately until Virginia took the lead in establishing the MMAC Program that recognizes this service, it was difficult for them to use these skills as they transitioned to the civilian workforce.”

Veterans have had difficulties applying for civilian careers because many civilian health care positions require certifications, licenses and education that are not compatible with their training, at least on paper.

“A lot of people get out and end up doing something totally different, so all of that experience is gone,” said Troy Barnes, 50, a clinical care technician at Bon Secours Western Branch Primary Care.

Barnes spent 23 years and six months in the Army before retiring as sergeant first class. He was working as an instructor for the Basic Officer Leadership Course in San Antonio, Texas, at the time, then took his transitional leave in December 2016 to his hometown of Norfolk with his wife, Diane Barnes, and their children Tanaya, 10, Taina, 8, and Tia, 5.

He needed a job and heard about the MMAC program, so he applied online. He officially started in May 2017 and joined Western Branch Primary Care in August. As a clinical care technician, he assists physicians with patient needs by assessing vital signs and symptoms, administering medicine and addressing concerns not unlike a licensed practical nurse.

He said his military training carried over smoothly to Western Branch as he developed other skills. Many of the instructors in military medicine are actually civilian EMTs, he said, and he’s trained to be independent and make decisions in the moment using his best judgment.

“I’ve learned the Army way, and that actually crossed over to the civilian sector. They gel together pretty well,” he said, adding that the telephone calls for medications and people skills are some of the newer muscles he’s worked. “You don’t really do that in the Army.”

Adriaan Richards, 32, is another clinical care technician at Western Branch Primary Care who came through the program. The eight-year Navy veteran was working in the emergency room at Sentara Norfolk General when he heard about the program. His first day in Western Branch was Dec. 4.

He still uses the SOAP method — subjective, objective, assessment and plan — for patient notes that he learned in the military, and eight years of intense drilling is still fresh in his mind. He said those drills continue to serve him well.

“We would go through these drills and scenarios like, ‘this is what you’re presented with, now what would you do,” he said. “A lot of these drills prepared us for real life scenarios, so we would know how to respond or react, whatever the case is. It was basically an algorithm of what you needed to do.”

Bon Secours Virginia Healthcare is one of eight Virginia health care systems participating in the MMAC program. As of June 28, according to an email from public relations coordinator Lori Sharp, Bon Secours Virginia employs 17 veterans in the program, 11 of whom work in Hampton Roads like Barnes, Richards and Romane.

The opportunity has been tremendous for Romane and her family. She joined the Navy in 1999 as an undesignated airman on the USS George Washington aircraft carrier, received hospital corpsman training in 2002 in Great Lakes, Ill. and was deployed to Kuwait with Fleet Hospital 15 for Operation Iraqi Freedom.

She attended school from 2003 to 2005 while she was on active duty along with her husband, Dwight. They have two children, Nigel, 11, and Nathan, 7. She said it was hard for her to find medical work after she finished her eight years of duty in 2007.

But now she’s able to keep helping people using her Navy training while spending time with her children.

“It’s helped tremendously because I’m able to be more of the mommy and also the nurse at home. It’s allowed me to consider putting my sons into private schools and pay the bills. It’s just helped out a whole lot as far as my family life,” she said.