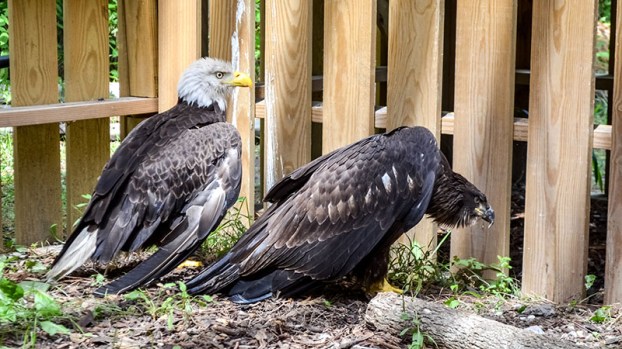 Bald eagles Willis and Aella recover in the flight enclosure for large-winged birds at Altons’ Keep Wildbird Rescue and Rehabilitation Center in Suffolk.

But these birds weren’t flying. Instead, White hollered at them and the birds took off down the length of the enclosure, with Aella flapping her wings hard and Willis doing a hopping sprint somewhere past 10 miles an hour.

“Imagine having to chase him down in the woods,” White said.

The two bald eagles are among more than 100 birds that have been brought to Alton’s Keep Wildbird Rescue and Rehabilitation Center in Suffolk for rehabilitation, according to White, who co-founded the center with his wife, Robin Alton-White. Some of White’s recent visitors have been hawks, crows, yellow–crowned night–herons and a pair of egrets.

“What happens is this time of year they start to branch, which means they come out on the nest and walk on the branches but still can’t fly,” White said about egrets. “The juveniles will fall on the ground but you can pretty much walk up to them and pick them up when they’re that size.”

White has had five bald eagle cases since he received a federal permit from U.S. Fish and Wildlife Service and a state permit from Virginia Department of Game and Inland Fisheries earlier this year to rehab injured and orphaned bald eagles.

One of them was euthanized due to the severity of its injuries, and another was brought in for extreme emaciation but could not be saved, White said. He spent two days rescuing and rehabilitating a 10-pound juvenile that was found in Virginia Beach over Memorial Day, which had fortunately recovered and had been released back into the wild.

“It was its first flight from its nest in Virginia Beach and crows attacked it, then it had crashed into an oak tree,” he said. “It was hanging upside down from a limb while people were having a cookout in their backyard. They called, and I went out there to capture it.”

Willis, the 10-year-old male with the iconic white head and tail that bald eagles develop around age 5, was brought in on May 21, White said. He was found in a marsh and had to be chased down, then taken to a vet.

His right wrist was dislocated and needed a wing wrap. He then lost all the secondary feathers in that right wing.

“He’s just going to be here to grow feathers,” White said. “He’ll be here for a couple of months, doing wind sprints to keep his stamina up.”

Aella came in on June 25 with a less serious wrist injury compared to the senior Willis. The problem is that the girl is just a fledgling, only a few months old but still about a pound heavier than Willis. White said it’s typical for female birds to be bigger than males.

Normally, a fledgling will soar from its nest to a perch and back, but Aella will have to learn to fly from the ground, where her wings feel that much heavier. That’s why White has been pushing her to run, flap her wings and get off the ground. He said her time in flight school has been going well so far.

“You have to come in here every day, twice a day, and run them until they mouth-breathe. Now I don’t do that to Willis, because he’s got to grow feathers, but I’ll run Aella until she mouth-breathes. This is only her third day in (flight school), and she’s already gotten a foot off the ground and flown 20 feet,” White said.

The prognosis is good for both of the bald eagles, and they should be able to return to the wild. It’s just a matter of time.

“It’s just going to take time to see Willis’s feathers grow back in. I can see by the way he runs and flaps his wings that as soon as he gets enough feathers on that right-hand side, he’s going to be flying. He’s a very wise bird,” he said.

At Alton’s Keep, White and his crew are nearly finished building a new, multi-purpose enclosure with a white-tipped bird in mind.

“Once that is finished, we’ll be able to get our letter of recommendation and start the permitting process through the U.S. Fish and Wildlife service to obtain an education, non-releasable bald eagle from somewhere in the country,” White said. “They’re everywhere, just looking to be placed.”

He said the tricky and complicated permitting process is going to be worth it for two reasons, the first being the need for another bald eagle rehab center in the region.

The Wildlife Center of Virginia in Waynesboro set a new record with 55 bald eagles admitted in 2017. The population has largely recovered since it nearly went extinct 40 years ago, but eagles still face constant dangers, such as lead poisoning from ingesting ammunition that hunters shoot at deer and other game animals.

Now that Alton’s Keep is permitted for eagles, White will be able to handle some of that load.

“I’ve been rescuing bald eagles for five years and I always took them to (The Wildlife Center of Virginia in Waynesboro.) I’ll take them to Waynesboro if there’s something critical — they have one of the best hospitals for bald eagles in the country — but for minor injuries like a sprained wing, they don’t have to be transported up there,” he said.

The other reason is to have a bald eagle for educational purposes. White has several other educational birds for local programs with kids.

“I want the kids to see something other than a picture in a book or a black dot in the sky,” White said. “You really see the look on the children’s faces when you’re talking about them. They get to look at them and really understand.”

In the enclosure on Wednesday morning, White worked Aella into another sprint and the bird spread her wings — about 5 feet wide — and quickly flew over a log and camo-patterned kiddie pool.

“She’ll learn pretty quickly. She’s got a wise old man to teach her,” White said as he looked at the huddled pair of birds.

Kroger to open this fall