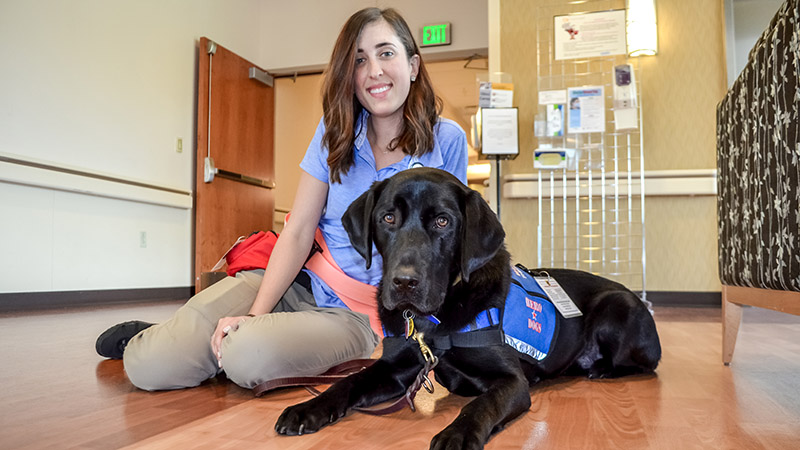 Patients in need of rehabilitation at Sentara Obici Hospital are being assisted by a 58-pound helper on four legs.

Bobby is a facility dog trained through Hero Dogs Inc. and handled by his owner, Amber McKee, a physical therapist at the hospital. Facility dogs work with qualified staff at residential or health care facilities to provide animal-assisted therapies.

Hero Dogs is a Maryland-based nonprofit that improves the quality of life for veterans by raising, training and placing service dogs and other skilled canines free of charge. McKee’s 3-year-old black lab is named after Robert “Bobby” Grant Kreider, an Army paratrooper from 1943 to 1947, and was donated by Lynn Risinger for the nonprofit’s advanced training program, according to hero-dogs.org.

“Bobby went through this whole training with the idea of being placed with a veteran, but their goal is to make sure each dog is in a position for optimal success,” McKee said beside Bobby and Occupational Therapist Kayla Ingerson, the dog’s other trained handler. “They thought he would do better with a physical therapist.”

McKee’s sister, Kelsey McKee Garcia, raises puppies for Hero Dogs and recommended Bobby to her when the organization expressed interest. McKee graduated from North Carolina’s Elon University in December and started at Sentara Obici earlier this year. She then successfully pitched her program to the hospital board, much to her own surprise.

“I had no confidence that I was going to be able to get this hospital to do it,” she said. “It was a complete reach, but the support that I’ve gotten is pretty incredible. Everyone has been really understanding and supportive and helpful in a way that I really didn’t expect.”

McKee and Bobby started with four days of initial training at the Maryland headquarters, plus a day of on-site training at the hospital. The pair are two months into a six-month training process with monthly checkups at headquarters and a certification exam at the end.

“It’s this really intensive training process,” she said, “Then you get to have this puppy that goes wherever you go.”

Bobby is laser-focused and well-trained. He quickly responds to more than 60 specific commands, whether he’s picking up his leash to give to McKee or sitting still and calm, all while keeping his eyes locked on her.

Every display of obedience earns him another Nulo treat. It’s through this positive reinforcement that he’s learned to behave with both patience and persistence.

“One of the games I do a lot with him at home is called ‘101 things to do with a box.’ I put a box in front of him and grab my little clicker and the treats,” McKee said. “I want him to do something with the box, but he doesn’t know what I want him to do, and he has to figure it out.

“Maybe I want him to put his back left paw in the box, so I train him to use that paw with treats and other techniques. He has to be able to work through the frustration.”

McKee makes her commute to the hospital from Portsmouth with Bobby and brings him to his kennel in the office of Rehabilitation Team Coordinator Marquetta Reaves before her daily duties, unless there’s cause to bring him along.

He’s not a service or therapy dog. He’s a facility dog that’s able to accompany McKee to visit patients and actually help the therapists achieve treatment goals. This dog has already gotten a friendly reputation at the hospital in just two months with McKee. Nurses, doctors and patients alike find him charming and helpful.

“When we’re walking by and he has his vest on, they get excited and a little bit more alert,” Ingerson said. “They’re just happy. He brings some type of joy, even just by looking at him.”

“This hospital is like stupid-obsessed with this dog,” McKee agreed. “It’s adorable and I love it.”

Smithfield resident and Sentara patient Cheryl Warren is one of his new fans. She met the dog during her second rehab session with McKee.

“We bonded that day,” she said. “He seemed like a very nice dog.”

When he’s got his vest of zippers and pouches on, Bobby is focused on the job at hand. He’s been conditioned not to react to the smells, sudden noises and other distractions that fill each hospital wing.

In every case, McKee walks into the room alone with Bobby standing patiently outside the door. Bobby only gets involved if both he and the patient are comfortable with each other, McKee explained. He won’t react to any aggressive behavior from a patient, as things are taken slow and steady.

“I think this is an incredible program that has the potential to really affect a lot of people, but the way to do that is to do this well and do it right,” she said.

McKee often goes into a patient’s room with Ingerson or another therapist to meet both physical and occupational therapy needs, all while Bobby is sitting patiently and quietly, out of the way on his Mutt Mat.

“I’ve seen him for up to 20 minutes, peacefully and quietly staying in the corner and waiting for our commands while we take care of the needs of the patient,” Ingerson said.

Physical therapy is focused on a patient’s mobility and addressing issues that are restricting their movement. As an occupational therapist, Ingerson is more focused on the fine motor skills needed for daily living and self-care, like putting on socks and other coordination tasks.

“In acute rehab we overlap a lot, because in order to put on your socks, you need to get on the side of the bed and hold your balance,” McKee explained.

The problem, according to McKee, is that patients can be difficult to motivate, especially with repetitive, mundane tasks that are meant to regain their strength and functions.

“It’s a challenge to find a way to motivate people, because it’s so frustrating,” she said.

But instead of just doing an exercise, they’re playing with Bobby. With McKee and Ingerson steadying and supervising, the patients are reaching to feed the dog. They’re using their walkers to move closer to him. They brush him, pet him, and before they know it, the rehab session is successful.

“There’s this external validation of ‘if I reach far enough, then I get to give a treat to the dog,’” she said. “Now all of a sudden, there’s a motivating factor to participate and engage, and there’s this response when you engage.”

It was the same for the elderly Warren, who was admitted for a resurgence in her multiple sclerosis symptoms, combined with Bell’s palsy and chronic back pain.

“He took everything off my mind, all the things I was going through,” she said as he wagged his tail in front of her. “I like interacting with him.”

It’s similar to how facility dogs are used in the rehabilitation of children, but it’s unusual to see one at work in an adult, acute-care hospital, which is why McKee is so excited by the prospect.