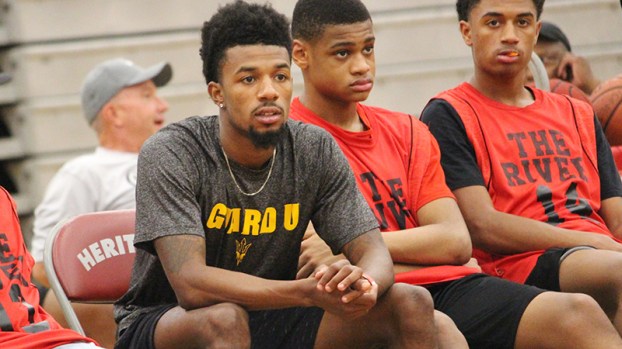 Every young basketball player dreams of one day being able to perform at the highest of levels, the professional ranks, doing something they love for money.

“It’s great. To be able to keep playing basketball just from where I came from and my story and to get where I’m at now is a tremendous feeling,” said Evans, who played on the collegiate level first at the University of Buffalo and then Arizona State. “But I also feel as if people are still counting me out, and I have more left to prove.”

Bobby Hurley, a former NBA guard and the man who coached Evans at both Arizona State and Buffalo, took to Twitter to share his thoughts on the news.

“It was easy to be confident going into battle with Shannon Evans,” Hurley tweeted. “Brilliant pro career in his future.”

Evans signed a one-year deal to play for the highest-regarded league in Hungary. He departed on Aug. 14 and will be there at least through June 15 for the duration of his contract.

“I don’t know too much about the team, but I know the coach has a great track record with winning and letting his players play,” said Evans, eager to soak the experience up like a sponge. “Depending on playoffs, the season is about nine to 10 months. I know the Euro game is different and very physical. Honestly, that’s about all I know about it, and I just want to go over there and learn as much as possible.”

In preparing for the next step in his journey, Evans has turned to one of the premier pros at the NBA level in Houston Rockets guard James Harden.

“I talk to a lot of pros. It’s more of a fraternity, since we all know each other and talk. But the main one is probably James Harden,” Evans said. “Ever since my ASU days, he has always been someone I leaned on a lot throughout the season.”

“Andre is another pro that has been helping me out throughout the process so far,” Evans said of the former Warriors All-State performer with a decade of pro playing experience following his college career at Winthrop.

In fact, Evans and Jones are planning to team up together to have a basketball camp in Suffolk in the near future. “So the community can be on the lookout for that as well,” said Evans, who last got to play in front of the home fans back in April at the Portsmouth Invitational Tournament.

Nansemond River followers can also watch another Evans on the basketball court this winter. Shannon’s younger brother, Myles, is entering his junior season for the Warriors and figures to play a key role.

Bulldogs’ scrimmage in the books