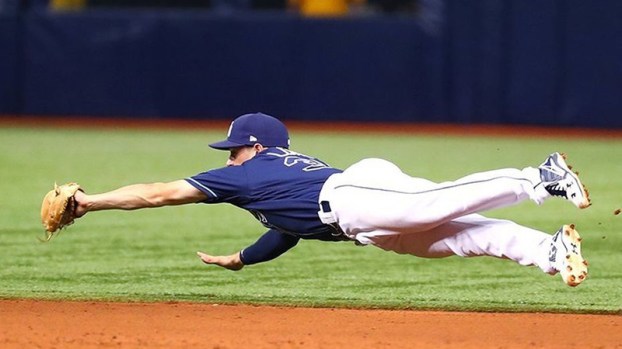 Brandon Lowe got a call up to the majors and has made a few plays for the Tampa Bay Rays. (Tampa Bay Rays photo)

Lowe called up to majors

After an incredible hot hitting streak for the AAA Durham Bulls, Lowe recently received a call to come on up to the Tampa Bay Rays.

He earned his first start against the Chicago White Sox last week and has played in several games with the Rays so far.

He was called up after his impressive numbers over the last couple of months for the Bulls. Between AA and AAA, Lowe hit .297 with 22 home runs and 31 doubles between Durham and AA team Montgomery.

The Rays media asked him about his debut.

“It’s indescribable. It’s been a dream since I was a little kid, and to have so much of my family here to witness it is just amazing,” Lowe said to the Rays media.

“You’re playing against guys that you’ve played with in video games,” he added. “It’s a pretty cool experience. It’s everything you really think of.”

At the time he was promoted, he was on the road with the Bulls. He was in his hotel room, and his manager called him and told him that he needed to speak with him. Lowe joked that his initial thought was that he had done something wrong or was in trouble. However, the coaches came into the room and gave him the news, and he was shocked.

It was obvious that Lowe’s hot hitting streak wasn’t going to go on for too long without the Rays eventually giving him his first call-up. They drafted him in the third round of the 2015 draft. Lowe didn’t break out until 2016, when he was playing with the Charlotte Stone Crabs. With the Stone Crabs, he hit .311/.403/.524 with nine home runs, 46 RBI and 34 doubles on his way to winning the Florida State League Player of the Year.

Lowe normally plays at second base but can play in both the infield and the outfield and is currently playing outfield for the Rays. Lowe has stayed even-keeled throughout the journey. When the hype surrounding him the last couple months continued growing, it didn’t faze him at all.

He said that baseball is a humbling game in which he knows if he ever gets caught in the hype, it could quickly knock him back down.

Before being drafted, Lowe played at Nansemond River, where he was among the top prospects in Virginia. He then went on to the University of Maryland, where he earned All-Conference and All-American honors.

By Matthew Hatfield Correspondent Every young basketball player dreams of one day being able to perform at the highest of... read more