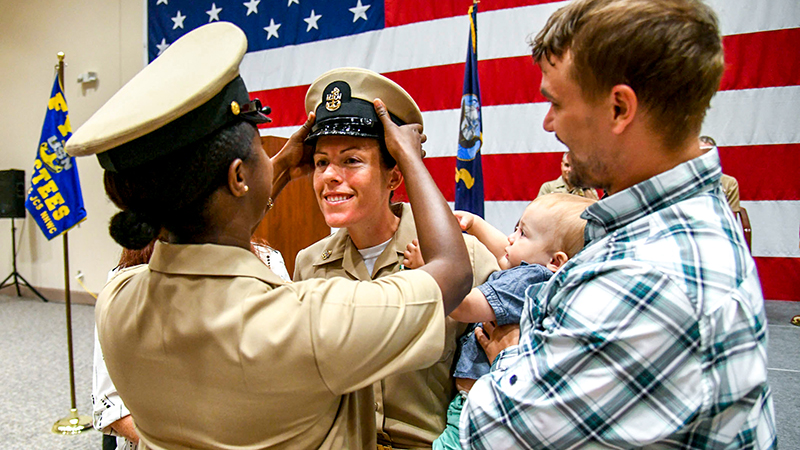 Thirteen Sailors from various commands in Suffolk donned khaki uniforms and combination covers for the first time during a chief petty officer pinning ceremony on Sept. 21.

“This is a proud moment for you and your families as years of hard work and dedication culminate in your achievements today,” Brown said. “You are the heirs to the tradition and leadership of the Navy Chief Petty Officer.”

Achieving the rank of chief petty officer, or E-7, is a prestigious accomplishment no other service regards as highly, as the Navy Chiefs are considered experts in their field and are charged with completing the mission and developing sailors.

“A few moments stand out in a sailor’s journey in the Navy — the day you graduate boot camp, the first time you approached your ship moored to the pier, and the first time you become a petty officer,” said Senior Chief Petty Officer Jimmy Halleran, Navy Cyber Defense Operations Command, command Senior Chief. “While those are memorable occasions, nothing in their careers will ever equal what these sailors accomplished today — their entire way of life has changed. They have been accepted, and now they’re Navy chief petty officers. I looked on with pride as they donned the cover of ‘The Chief,’ knowing they are going to do great things for our Navy.”

Chief petty officers are recognized throughout the Navy by their khaki uniform and anchors insignia. To wear the uniform means a sailor has been recognized as a leader.

During the ceremony, the newly appointed chiefs were ceremoniously pinned to the rank of chief petty officer by family members and fellow chiefs.

Dating back to the foundation of the chief petty officer paygrade in 1893, the chiefs’ pinning ceremony is a tradition unique to the Navy. The ceremony signifies a new position of increased leadership and responsibility.